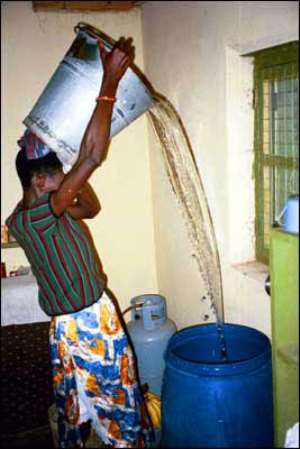 SOME CONCERNED citizens have expressed displeasure at the delay in taking action on the Justice Adade Probe Committee report on the Ghana Water Company Limited (GWCL).

According to them, nothing has been heard from government as to the implementation of the committee’s recommendations, adding that it’s because of such inertia that encouraged some staff of the utility companies and others to loot and squander taxpayers monies. These losses, they claimed, were later passed onto consumers to pay by way of increased tariffs.

Some of the concerned callers were of the view that if the former bosses of GWCL were made to pay the billions of cedis recommended by the Adade Committee, it could be used to make a significant improvement in the water services nationwide.

They have also urged the government to prosecute the persons implicated in the GWCL Probe reports to serve as a deterrent to others who are in the GWCL and elsewhere.

They have, therefore, appealed to the minister of Works and Housing to expedite action on the reports which recommended that some people should refund billions of cedis to GWCL.

The committee recommended that former managing director of GWCL, Mr Charles Adjei, and Mr A.B. Agyei, the former Manager in-charge of materials, be made to pay ¢2.4 billion to the GWCL for a fraudulent transaction they undertook in the importation of water meters for GWCL two years before the probe.

The committee also recommended that Mr A.B. Agyei and three others, including Mr Cobbie Kessie, former deputy MD of GWCL are to jointly pay ¢72 million to GWCL.

These among other monies recommended by the probe committee to be paid to the chest of GWCL have been lying in the locker of the Minister of Works and Housing since it was submitted.

Concerned callers at the offices of the Daily Guide, in the wake of the current increases in utility tariffs, including water, as announced by the Public Utility Regulatory Commission (PURC) last Monday, have urged the minister to ensure the recovery of the money “chopped” by some people at the GWCL.

“We believe that it is the misdeeds of the former bosses of the GWCL that has prompted the frequent increases in water tariffs. They can not “chop” money for us to suffer. Ask them to pay back the monies”, some callers intoned in anger.

Meanwhile, when the Daily Guide contacted the Minister of Works and Housing, Mr Yaw Barimah three weeks ago on the fate of the Adade Committee’s report, the minister replied that the document was bulky, and so needed more time to study it.

He also explained that he had other priorities to tackle, as ensuring that many Ghanaians get potable water to drink and at a cheaper cost.

It would be recalled that the former Minister of Works and Housing, Hon Mr Kwamena Bartels, commissioned a five-member committee headed by Justice N.Y.B. Adade to probe the affairs of the GWCL over the past five years.

The committee completed its sittings in October last year, and submitted its reports to the current Works and Housing Minister, Mr Yaw Barimah this year.