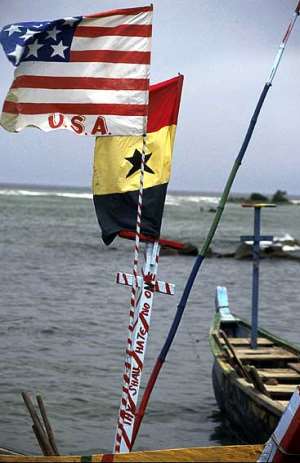 THE acting Minister of the Interior, Dr Kwame Addo-Kufuor, yesterday launched the Ghana Dual Citizenship Regulation Act at a ceremony at the Ghana Immigration Service (GIS) in Accra. With the launching, Ghanaians with foreign nationalities who so wish would become citizens of Ghana upon the completion of the necessary documentation. Launching the programme, Dr Addo-Kufuor said Ghanaian missions abroad have been directed, to start issuing the relevant forms and stickers to prospective applicants with immediate effect. He said it has become imperative for the government to quickly put into effect measures to enhance access to the dual citizenship due to the contributions Ghanaians abroad make towards the development of the nation. He said about $400 million is remitted annually by Ghanaians abroad to boost Ghana’s economy as against contributions of foreign direct investment which, he said, contributes about $200 million annually.

Dr Addo-Kufuor noted that regulations involved in the full implementation of immigration and citizenship laws are rather complex but added that the government will provide lawyers and experts to guide those who may have to deal with these regulations.

“I can now clearly state that the government’s policy of making it possible for all Ghanaians living abroad to become citizens of Ghana as well as citizens of other countries, is now a reality,” he emphasised.

He expressed the hope that all parties would work together to ensure that problems that would be encountered in the course of processing the applications would be overcome with the minimum of bureaucratic impediments.

Dr Addo-Kufuor noted that the immigration service is one of the vital state institutions and said the government recognises the important role it plays as the frontline agency in ensuring that the goal of the Golden Age of Business is achieved.

He said it is through their efforts that genuine businessmen and investors enter this country to assist in the developmental efforts. The minister, therefore, urged them to guide against actions that may scare foreign businessmen from investing in the country.

He urged them to ensure that the country does not become a home to immigrants who will destabilise its democracy or engage in anti-social activities. He said in view of the important role the immigration Service plays, government is taking a critical look at their needs to ensure that they have the resources needed to enhance their efficiency and effectiveness.

The acting Director of the Ghana Immigration Service, Mr K. Hodari-Okae, called on the public to join hands with the GIS to protect the nation against unscrupulous foreigners.

He said whoever has information on any anti-social immigrant should not hesitate to inform the service for prompt action.

He also asked the government to speed up the process of providing the necessary logistics for officials of the GIS to perform creditably.