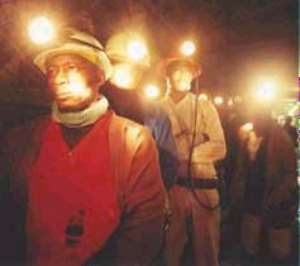 Minister for Mines, K. Adjei-Darko and the Western Regional minister, Mr. Joseph Aidoo have been accused of subverting the interest of at least 1,800 miners who have been adversely affected by the closure of the Prestea Gold Resources Company and the granting of a licence to a foreign firm to undertake surface mining. The Chiefs and people of Prestea have also separately claimed that the actions of the two ministers will lead to huge job losses and environmental degradation. At the end of a meeting of the Chiefs and people of Prestea on June 19, 2002, they passed a resolution, which asserted that “the closure of the underground mine continues to worsen the plight of people of Prestea, especially, there is excessive prevalence of galamsey activities with the security personnel based on the collaborative efforts of BGL mines and these illegal miners.” They claimed that the Minister of mines is biased and prefer foreign investors to Ghanaian investors. Part of the resolution read “we observe how insensitive you (Minister of Mines) are to our plight and see your actions as calculated attempts and ploy to rob us of our virgin lands, vital employment and create social disaster in the disaster community. BGL continue their operations with impunity to degrade our lands, thereby creating serious environmental hazards with our immediate habitat.” Workers of the Prestea Gold Resources Company are threatening to go to court to ensure that the country's labour laws are not violated by the Ministry of Mines. The workers also appear displeased with their natural union leaders who they claim have not fought vigorously enough for them.