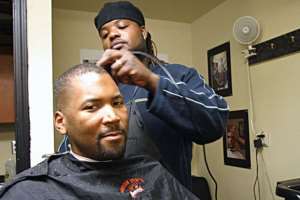 *From barbering shops
Fighting the Sakawa menace continue to be a challenge for the country as the perpetrators of the vice keep adopting new methods every passing day.

The latest method being adopted by the Sakawa practitioners, this paper learned, is that the fraudsters have now resolved to either buy or collect human hairs from barbers or from their shops in order to meet the orders or demands of their Spiritual Masters.

Some of the barbers this reporter spoke to were excited about the latest Sakawa move. To this group of barbers, there is good money to earn from the new approach.

“Massa, these guys can offer as much as $20 to $200 for human hairs. And who would not like such easy and cheap money”, one barber told this reporter. His other colleagues, although opened up on the issue, they refused to comment on how much they earn from the sale of the human hairs.

While some of them refused to comment on the issue; fearing that the publication of the story has the potential of affecting their businesses, others denied that such things were ongoing and even gave this reporter a very cold reception.

“I do not know anything about this and even if I knew it was going on, I would not encourage it because such acts are just immoral,” Mr. Samuel Odame, a barber at Nii Boi Town told TODAY.

Another barber at Abeka Lapaz who pleaded to remain anonymous disclosed that a lot of their colleague barbers were into it.

“Some even sell the human hairs in dollars to the Sakawa boys because they think they also have to make some cash from them,” asserted the anonymous barber.

Another barber who operates at Odorkor Official Town and gave his name as Nana Mike said he has personally been approached on several occasions by some of these guys on selling to them some human hairs he has gathered after the close of work.

“I became very suspicious about the motive behind what they were asking for; I told them I am a Christian and can never help them to achieve their aims in such a manner which I describe as a very bad omen,” recounted Nana Mike.

That has been the new methods after the societal inquest into activities of the Sakawaists had been on all time high. It is all to maintain their newly acquired status quo.

Investigations conducted by the paper revealed that these Sakawa boys now move or loiter around barbering shops in desperate search for human hairs to buy or collect from the barbers' shops.

This reporter discovered that the latest craze after eavesdropping on conversations by some of the practitioners of Sakawa at some popular internet cafés in Accra. They often go to the cafes to gather and plot new strategies for their operations.

And through the conversation, TODAY found out that the Sakawaists now find human hairs as the latest best material for their spiritual operations. Some were simply elated about the way the human hairs have eased their burden.

Previously, the practitioners were mandated by the Spiritual Godfathers to go for human heads, organs of human beings and often made to sleep in coffins, eat from refuse dumps and other weird practices.

Obviously, the search for human hairs is quite easy and less cumbersome as compared to previously, where their acts involved murder and killing of human beings and as this reporter gathered and observed from their gestures and body-language, it does seemed to be bolstered with the relatively easy condition of collecting human hairs.

Latest Photo Reports
Catch up with all the political quotes from our politicians.
Advertise here
More from General News
ModernGhana Links
CETAG to remain on strike as it waits on government
Report incidents of corruption – CHRAJ charges Ghanaians
YEA partners Ghana prisons service to recruit over 2,000 personnel as prisons office assistants
TOP STORIES