Is this Obama’s Ghana? - The case of political brutality in Akwatia 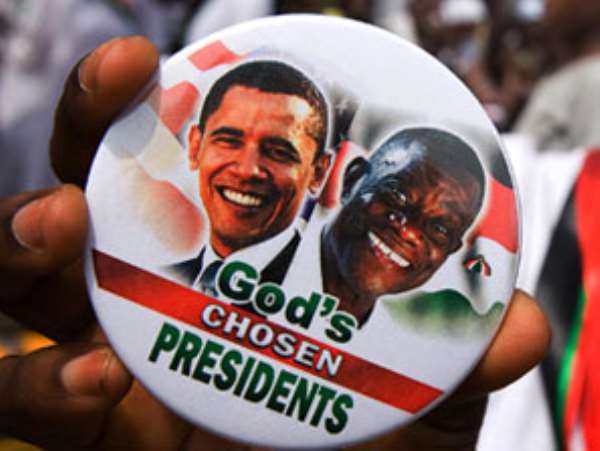 Barely two months ago when asked why he chose Ghana over other African nations to make his first official visit as the first President of the USA of African heritage, Barack Obama pointed to Ghana's record of peaceful transitions of power and Ghana being a model of democracy in Africa.

As a sequel to Obama's historic visit to Ghana, Laban Carrick Hill wrote a three- page tribute to Ghana in the Sunday August 9, 2009 Travel section of The New York Times “ The Two Faces of Ghana.” He extolled the bon-vivant nature of Ghanaians that has earned them high accolades as the most hospitable people on the planet. A people whose movements are tuned to music and eager to share their assortment of spicy foods are worth visits from the world, Hill concluded.

Carrick Hill did not say much about the other face of Ghana- the one that is not put up for international view- the one that is the opposite of the cultivated and humbly smiling posters that say “Akwaaba- Welcome.” On Tuesday August 18, 2009, there was a by-election in Akwatia, a mining town in Eastern Ghana for a parliamentary seat. An unfinished business from the famous December 2008 elections that drew US President Barack Obama to Ghana in July 2009 had to be concluded. The courts had ruled that six of the polling stations should re-vote. Going in, the candidate of the New Patriotic Party (NPP), Dr. Kofi Asare, had a lead of 3079 ahead of his closest rival, Baba Jamal of the National Democratic Congress (NDC) with 83 out of 86 polling stations validated. The pollsters had declared this a no-contest for the NPP Candidate.

The NPP leadership who went to boost up their candidate from Accra was met by anything but hospitable Akwaaba. The outnumbered policemen looked on helplessly as road blocks were illegally mounted and any car displaying any sign of NPP support was fair game for serious assault with intent to kill. The General Secretary of NPP, Nana Ohene Ntow, found himself pulled out of his car via its shattered windshield, stoned and pummeled with blood pouring down his face. His predecessor and current Member of Parliament, Hon. Dan Botwe survived a large cement block thrown through his car. His driver was not so lucky and is fighting for his life in the hospital. There are reports of at least two young men who have lost their lives and several wounded. Who will paint this picture of Ghana for the world to see? Who will complete the New York Times piece and depict the other face of Ghana? The one where the fight for political office easily draws blood and murder? Who will tell the world that the police and military take sides in elections and look the other way? Who will dare expose Ghana that by the grace of God, it was within a few hairs of blowing up just like Kenya in December 2008 and the Electoral Commission, just like Kenya's would not have had clean hands when the bodies were counted?

Ghana has to take a stand to have only one face in its march towards democracy, peace and security. Just as President Obama lectured the parliament, it must do so by building and strengthening its institutions- the police, military, judiciary, electoral commission, political parties, civic society, etc. The NPP is about to make amendments to its constitution and already there are reports of bribery to prospective voters to maintain the status quo. Today it is a fight between NPP and NDC for one parliamentary seat whose outcome was predictable. Tomorrow, it will be a fight to the death NPP and NPP when its teeming youth discover that the old guard has disenfranchised them within their own party from having a say in who leads them. What is wrong with having every registered party member vote in primary elections? The youth holds the power and when they are infuriated, the fury of hell will show no mercy. That will not be Barack Obama's Ghana and it will not be any peace loving person's either. Remember, that Kenya was touted as one of the most peace-loving countries in Africa. Unlike Ghana, Kenya has not had a coup d' état. Ghana narrowly escaped the bullet in December 2008. Akwatia reminds us of the prevalence of lawlessness and political brutality. Let us catch our collective breath and be serious about building up our country through strong institutions and away from personalities and even blind political support. Ah Yes the headline from Ghana News Agency said “ Akwatia re-run election begins peacefully” and Dr. Kofi Asare won after all by some 2000 votes . Will Ghana continue to present two faces and slowly but surely begin the process of implosion and eventual shock to the world when it is unmasked?