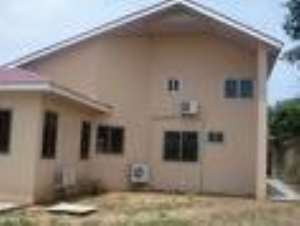 Government is to revamp the construction sector, the centre of attention of which will be the development of a viable housing mortgage scheme, in a bid to overcome a crippling 500,000 housing unit shortage nationwide. The Vice President, Mr John Dramani Mahama, who announced this on Monday, said the measure would help to strengthen a weak mortgage sector and make it deliver over 100,000 housing unit annually.

Interacting with a Nigerian property development firm at the Castle, Osu, Vice President Mahama said the Mills Administration was currently working out a blue print for the housing sector, the focus of which will be the provision of housing units to the middle and lower classes.

The delegation of Cityscape International of Nigeria was led by the Ojomu of Ajiren Land of Lagos State, Oba Akinloye, and included Dr Tanre Towry-Coker, the Chairman of the company.

Vice President Mahama welcomed their entrance into Ghana's construction market, as it would help roll out the scarce housing facility to a number of workers grappling with high rent charges owing to the huge deficit. “The new policy direction shall focus on affordable housing scheme targeting the middle class,” he added.

He said although there had been some positive developments in the construction sector in the last few years, it had been skewed towards the  wealthy, leaving the middle class which had to contend with the high cost of renting apartments.

He said government would offer incentives to the private sector through the development of a regulating regime that would bring mutual benefit to both the property owners and developers.

Vice President said the development of sustainable mortgage scheme would serve as an incentive for workers to work towards acquiring their own housing units in a relatively short period of time and help boost the viability of the industry, compared to the mortgage schemes that currently obtained in the country.

He, therefore, welcomed the decision of one of Nigeria's main property and construction firms to enter the Ghanaian market with the object of complimenting the government's effort in this quest.

He said government was satisfied with the role that Nigerian investors were playing the Ghanaian financial sector, but said with the consolidation in those areas, it would be helpful if they diverted some resources to the housing sector.

Dr Towry-Coker touched on the linguistic and cultural patrimony that the two countries share, arguing that it was time they moved their experiences into other areas such as the development of economic models for the benefit of the people.

He said his outfit would like to partner the government using the private-public partnership model to provide quality affordable housing units in Ghana, in addition to interests in rural estate development and the oil and gas industry.