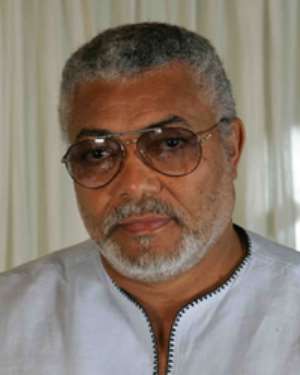 Former President Rawlings has called on Ghanaian youth to assert themselves on matters that concern the development of the country.

In a statement to mark International Youth Day, which falls today, former President Rawlings said many young people assume they have roles to play in the development of Ghana only when they have attained political office or have reached the prime age of 40.

“Our young people are quick to blame governments and other opinion leaders for not playing invaluable roles in society, but we need to ask if they assert themselves proactively.”

The International Youth Day, which was conceived in 1998 and has been celebrated under the auspices of the United Nations since August 2000 has “Sustainability: Our Challenge, Our Future”, as this year's theme.

Former President Rawlings said the youth being the leaders of the future and the engine of the country need to show strong interest in the economy, the environment as well as the socio-political development of society.

“In Ghana we are saddled with serious economic problems caused by the global credit crunch and economic mismanagement in the recent past. It is not enough when the youth throng the streets to express disgust at the harsh economic conditions. They need to suggest strong developmental policy options that they believe will help develop the country.

“Criticising without offering meaningful solutions is an exercise in futility. The world has moved from the days when only the older folk were seen as repositories of wisdom and knowledge.

“The dynamic nature of the world coupled with its great scientific developments mean the youth are strategically placed to offer more hope for every country's development.”

The former President said it was important that the youth employ the various associations they find themselves in, to good use by organising various forums to discuss matters of national concern such as environmental degradation, unemployment, the economy and democracy.

“This year the United Nations challenges the youth to empower themselves by participating in processes that affect their lives and it is important that while the youth take a cue from this call, government offers the right platform for them to take part in matters of national development and consensus.

He said many governments have paid lip service to matters involving the youth even though they are the engines of national growth and expressed the Mills administration will do a lot more in that direction.

"Ghanaians need to see government consulting the youth on a wide range of issues, strategically placing young people in positions of responsibility and encouraging capacity building amongst the youth," he added.

Former President Rawlings also cautioned the youth to be disciplined and do away with vices that tend to affect their lives and career progress.

“Drug abuse, alcoholism and sexual promiscuity with its attendant diseases are but a few of what can harm the development of our young people,” he said.

The former President said sustaining a progressive march towards a more inclusive role by the youth in national affairs is the responsibility of all sectors of the economy and prayed that today's celebration will serve as a great inspiration for the future.