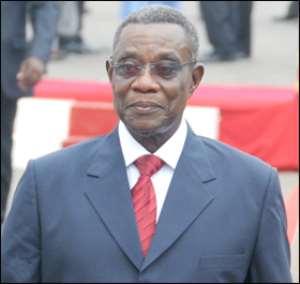 PRESIDENT JOHN Evans Atta Mills has given indications about his future in politics when he stated at the weekend that he might contest the 2012 polls.

The President said the positive impact his government would make on the lives of the people would be so massive that by the end of his first four-year term in office, even if he decided not to run again, Ghanaians would force him to.

The President was speaking at this year's annual Asafotufiam Festival of the chiefs and people of the Ada Traditional Area.

President Mills once again said that his administration had inherited far greater problems than he had envisaged.

Even though he did not catalogue the unexpected problems he was facing, the President conceded that Ghanaians voted for him based on the numerous campaign promises he made to them ahead of the December 2008 general elections.

He however stressed that he would make sure Ghanaians get the change he promised to bring in their lives and warned that no member of his government would be allowed to use national resources for personal gains.

On the acute shortage of premix fuel across the country, the President admitted he had a problem on hand, but was quick to say that the problems were in the process of being solved once and for all.

He said conflict and development were not bedfellows, and thanked the Paramount Chief of the Ada Traditional Area, and President of the Greater Accra Regional House of Chiefs, Djetse Nene Abram Kabu Akuaku III, for what he described as 'the peaceful, united and dedicated leadership of Nene Ada', which he said was worthy of emulation.

He gave hints of his government's determination to remove all bottlenecks associated with the Songor Salt Project so as to maximize its yields.

President Mills revealed that some EU68 million had been procured for the Ada Sea Defence Project, which he added, would take off soon.

The Greater Accra Regional Minister, Nii Armah Ashittey, noted that the Asafotufiam festival had become a success story and an envy of many due to the virtual absence of chieftaincy disputes in the area.

According to the minister, the Regional Coordinating Council (RCC) was saddled with numerous land disputes, and called for greater cooperation from chiefs and the general public.

Mr. Ashittey thanked the people of Ada for standing solidly behind the ruling National Democratic Congress (NDC) since its formation. He, on behalf of the RCC, donated GH¢2,000 and assorted drinks to the traditional council for the celebrations.

Earlier in a welcome address, Djetse Nene Abram Kabu Akuaku thanked the President for gracing the occasion and expressed the hope that the new administration would bring greater peace to the people.

“Ada is a relatively peaceful district and I hope we shall continue to be even more peaceful during your presidency”, he said.

On the renaming of constituencies, Nene Ada appealed to government and other stakeholders to name the Sege constituency Ada West; and Ada Constituency, Ada East; to promote homogeneity of the people.

Present at the festival were the two MPs of the district, Alfred Abayateye and Alex Tettey-Enyo, the DCE, Daniel Wussah, and other dignitaries.