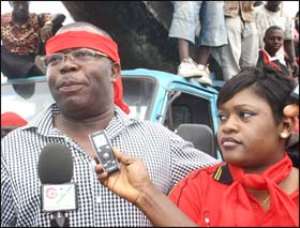 THE 'HIDE and seek' tussle between ex-Information Minister, Stephen Asamoah-Boateng, and the Bureau of National Investigations (BNI)  has intensified, with the former citing the latter for contempt and the BNI also deepening its quest to throw the hangman's noose around the neck of the politician.

This latest suit was obviously instigated after BNI operatives for the second time forcefully and physically prevented the politician and his family from flying out of the country though a court of competent jurisdiction had given them permission to travel.

Asamoah-Boateng, his wife and two kids were on board British Airways   flight 078, ready to take off to Heathrow in London when the Pilot, Captain Remington, announced that the plane had been grounded by the government of Ghana through the BNI and would not be allowed to fly until the ex-Information Minister, with his family, is forced to disembark.

The episode drew strong condemnation from passengers on board the international flight and some reportedly questioned whether Ghana had returned to its dark days where the respect of human rights was thrown to the dogs and the judiciary treated with impunity.

Though no reason was given by BNI for their show of power, and they had no Police order or court order to trample on Asamoah-Boateng's freedom of movement, a deputy Information Minister, James Agyenim Boateng, has told a number of media houses that the ex-Minister is a subject of investigation and therefore cannot be allowed to travel unless he seeks clearance from the security services.

Asamoah-Boateng has however insisted that he is not and has not been a subject of investigation by the BNI and that even when he willingly turned himself up at the Bureau, he was told that he had not been invited there.

He said the BNI, the Police or any organization has not charged him with any offence.

The ex-Minister is praying the court to restrain the BNI from abusing his freedom of movement and also interfering with the proceedings of the court.

The writ stated that “since final judicial power is allocated to the courts, no person can interfere with the administration of justice, that if the contemnors intend that I should not travel abroad, a condition precedent will be to apply to the court for an order or warrant restraining me from travelling abroad.

“Furthermore, the contemnors do not have the power or discretion to ignore the court or interfere with my freedom of movement in and out of Ghana without recourse to the court”.

DAILY GUIDE has information that BNI agents over the weekend stormed the home of Asamoah-Boateng's mother-in-law, mother of pretty-faced Zuleika, Asabee's wife, demanding his whereabouts.

They are reported to have pitched camp at the entrance of the house, monitoring persons moving in and out of the place.

Legal luminaries have described the development as unconstitutional and an abuse of power.

Kwame Akuffo, a private legal practitioner, has accused the BNI of arbitrariness. He told radio stations that Asamoah-Boateng's freedom of movement can only be curtailed if there is a court order restraining him, or a formal charge of criminality leveled against him.

He told Joy Fm that Ghana is not a police state or the former Russian Republic where citizens were mandated to seek clearance from the state before travelling.

“If the BNI feels strongly about the fact that a particular person is under investigation, it ought to go to court, charge the person with a crime and get an order to collect his passport.