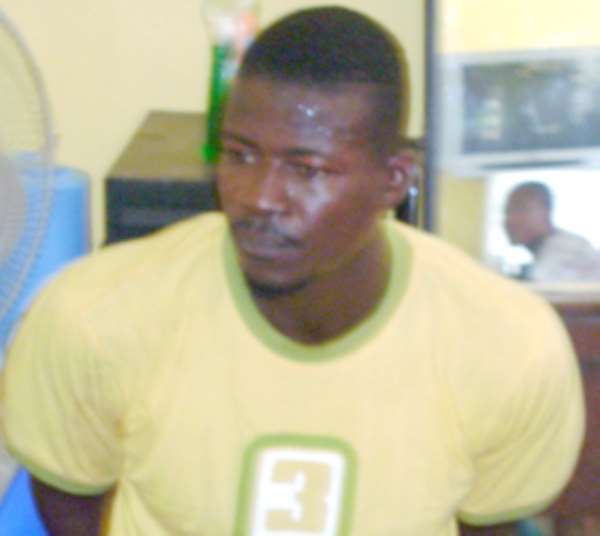 , the 28-year-old gym instructor who is on trial at the Kumasi Metropolitan Assembly (KMA) circuit court for allegedly raping and robbing a 19-year-old seamstress apprentice, has stated that the victim charged him GH¢10 for sex.

Opening his defence in court yesterday, the stoutly-built gym instructor denied raping the victim under duress, saying the victim consented to the actbefore it was done.

Similarly, the former Mr. Ghana contestant also denied robbing the victim of GH¢30 after the sexual act as had been alleged in a previous sitting.

Bawuah, who was without a legal counsel, likewise denied threatening to deal ruthlessly with anyone who dared come near the action spot to save the victim, as the prosecution witness alleged in the last sitting.

The gym instructor explained that when he saw the victim at the Asafo Neoplan Station on the dawn of Wednesday 29, 2009, she agreed to have sex with him after she had collected GH¢10 from him and given it to her sister.

He said he decided to have sex with the victim at the open space drinking spot when the victim, after collecting the money and sitting in the taxi, refused to go home with him.

Bawuah entreated the court not to entertain the victim because according to him, she was a prostitute who was trying to frame him up.

After listening to the testimony, the court presided over by Justice Adjei Frimpong, remanded the accused into prison custody for the third consecutive time, to reappear on August 19, 2009.

Bawuah, at the last sitting on Wednesday 5, 2009, could not give his testimony to the court, as he failed to hold back his tears when he was asked by the judge to respond to the testimony of the victim.

Against this background, the judge adjourned sitting to Thursday August 6, 2009 to enable the accused to properly open his defence.

In her testimony, the victim said she was at the Asafo Neoplan Station that dawn to board a bus to Accra after visiting her sister in Kumasi when the accused suddenly appeared from nowhere, held her hand and demanded that she followed him.

The victim said she refused to oblige because she did not know Bawuah; but the accused, who said he was a 'killer', threatened to deal ruthlessly with her if she failed to comply.

She said the accused forcibly took her to an open space drinking spot where he tore her clothes into shreds and raped her on a chair after wearing a condom.

She told the court that even though she was screaming for help when Bawuah forcibly dragged her to sit on his erected penis, the onlookers who had gathered at the place did not come to her rescue.

She said she was almost collapsing due to the 'rough' nature of the sex the accused took her through; when she realized that a Good Samaritan had appeared to rescue her.

According to her, she was stark naked and struggling to stand when the police appeared on the scene and caused the arrest of the accused.

According to her, the accused after raping her, also robbed her of GH¢30, which she was going to use as lorry fare to Accra where she was a seamstress apprentice.

The victim told the court that since that lamentable experience, she had been traumatized to the point that she could not sleep nor urinate freely without experiencing pains.

She therefore entreated the court to critically examine the case and let the law take its course to serve as deterrent to others.

Obeng Jnr, the guy who rescued the victim, in his testimony, corroborated the victim's story.

According to him, the accused had taken the victim through a prolonged bout of sex before he appeared on the scene to rescue her.

He said, the onlookers could not venture to save the victim because they were afraid that they could be harmed by the accused, who he said, was terrorizing guys in the area.

Obeng told the court that before he made the attempt to rescue the victim, he told one of the onlookers to take away the accused person's clothing and also call in the police quickly.

He said due to this arrangement, when the police arrived on the scene, the accused was still naked, together with the victim.

Obeng, who said he was given several hefty slaps by the accused when he attempted rescuing the victim, noted that the police after arresting the accused took along the condom he used.

The accused according to the prosecution team, on the dawn of Wednesday, July 29, 2009, bundled the 19-year-old girl into a taxi at knife point at the Asafo Neoplan Station in Kumasi and took her to an open space drinking spot and allegedly raped and robbed her of GH¢30.

This was when the seamstress apprentice had come to the station to board a bus to Accra after visiting her sister in Kumasi.

The accused, according to the prosecution, in his earlier caution statement to the police, admitted to having sex with the girl in an open space but however denied the two counts of rape and robbery leveled against him.

The prosecution said the accused claimed that the victim was a prostitute who charged him GH¢10 before consenting to the act.