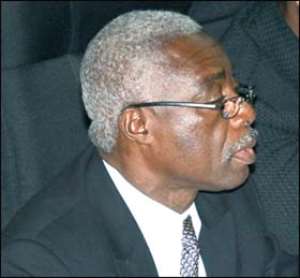 
The Chairman of the Presidential Commission probing the activities of Ghana @ 50, Justice Isaac Duose, yesterday showered tones of praises on the Western Regional Coordinating Director, David Yaro, for exhibiting a good performance.

He said if the Commission was to adjudge the best Regional Coordinating Director for the year, he would not hesitate to recommend Mr. Yaro, for his excellent presentation.

Mr. Douse made the commendation soon after the Chief Director had given a vivid account of the Western Regional Coordinating Council (WRCC) activities during Ghana's Golden Jubilee celebration.

The Chief Director, told the Commission that the RCC received an amount of GH¢ 700,000 from the Secretariat, out of which GH¢400,000 was used for the construction of the Jubilee durbar grounds, GH¢ 150,000 for renovation of self selected venues for the celebration and GH¢ 150,000 for the 13 District Assemblies and RCC.

He blamed the high stock of souvenirs on the high prizes, saying while the Secretariat sells its cloth for GH¢ 30, it was being sold in the markets between GH¢ 20 and GH¢25, worse of all, he contended that, “the anniversary cloth in the market was of higher quality than that of Secretariat”.

During cross-examination on the stock souvenirs, the witness recommended to the Commission that the prizes should be reduced drastically to increase sales, so as to defray the cost incurred by the Secretariat.

Mr. Yaro also added that strategies should be worked out if possible, to give souvenirs to people in the rural areas free of charge to enable them have a feel of the celebration.

When the Volta Regional Coordinating Director (VRCC), Vincent Komla Adzato Ntem, appeared before the Commission, he said the region had exceeded the amount given them by the Ghana @ 50 Secretariat to carry out its activities.

He explained that of the 7.2 billion cedis received, the region spent 7.4billion cedis, leaving most of the projects incomplete, while owing some contractors.

The Coordinating director who could not account for five out of the 10 air conditions purchased to furnish the Regional Presidential Lodge, the Minister and deputy Minister's offices and residencies, admitted to spending a chunk of the amount in renovating the presidential lodge.

Mr Adzato Ntem also affirmed during cross examination that the region has not accounted for monies spent on the Ghana @ 50 celebrations, but rather put the proceeds into RCC accounts.