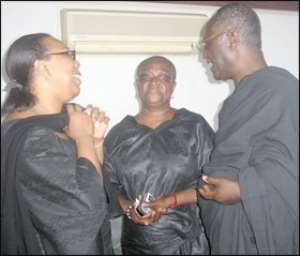 
A woman suspected by the police to be connected with the murder of the Managing Director of Summit Industries Limited, Kwame Kyei Apenteng-Mensah, in his room at his McCarthy Hills apartment on July 25, 2009 has been arrested by the police.

She is said to have remitted $65,000 to the deceased while she was abroad for the purchase of the house.

The late Apenteng-Mensah was said to have failed to live up to the promise and was only able to refund $40,000 to the woman. The woman was said to have persistently demanded the rest of the money from the deceased.

The Director-General of the Criminal Investigations Department (CID) of the Ghana Police Service, Deputy Commissioner of Police, Mr Frank Adu-Poku, told newsmen that the police had widened its net to arrest anyone suspected to be linked to Apenteng-Mensah's murder.

The body of Apenteng-Mensah 65-year-old man was found near his bed with a stabbed throat on the morning of Saturday, July 25, 2009.

The late Apenteng-Mensah, whose company produces Le Country mineral water, was said to be living with his house help in a separate apartment from that of the other members of his family.