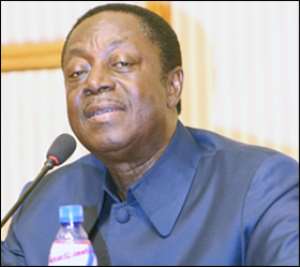 Accra, Aug. 4, GNA – The economy is more stable now than it was at the beginning of the year, Finance Minister Dr Kwabena Duffuor said on Tuesday.

Speaking at the signing of performance contracts for 32 State-Owned Enterprises (SOEs), the Minister said key macro-economic indicators continued to show positive signals, resulting in the gradual stabilisation in the cedi exchange rate and the rate of inflation.

The Finance Minister said inflation had stabilized and was expected to go down in the ensuing months.

The rate of inflation now stands at 20.74 per cent.

“On the whole it is clear that the economy is on track,” Dr Duffuor said, adding, that huge arrears commitment remained a risk.

He said the Government would do everything to create the enabling environment and urged the SOEs to position themselves to take advantage of the opportunities the economy offered to help to transform the enterprises from local entities to international competitive ones.

Akufo-Addo, Ken Take Ghana Back To HIPC – Mahama
31 minutes ago