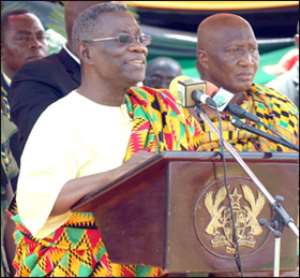 PRESIDENT JOHN Evans Atta Mills has observed that he and his team of Ministers are not special people in their own right and that it is Ghanaians who have made them special, “if we don't perform to their satisfaction, they will make us un-special”.

This he said in an apparent reference to the fact that the electorate will only renew the approval of his government based on laudable performance.

The president emphasized that political leaders are not above the laws of the country, therefore they should be held accountable for their stewardship.

The mechanism of checking embezzlement and corruption in the country should be strengthened for rapid economic growth, since state funds are not meant for Ministers and their families alone, therefore Chiefs must support the campaign.

There was a charged atmosphere prior to the arrival of the President at the durbar ground, at Methodist Park in Dormaa-Ahenkro, where the drummers, among the attendants of the various chiefs, dished out renditions of music accompanied by skillful and beautiful traditional dance to entertain the jubilant crowd.

He was speaking at Dormaa-Ahenkro, during the second day of his three day 'Thank you' tour of the Brong-Ahafo Region.

Addressing the Chiefs and people at the durbar, President Mills reiterated that the purpose of his visit was mostly to thank the people of the Region for their support during the elections and to join them to offer thanks to God for peaceful elections.

President Mills was ardent that his government needs constructive criticism, but added that we should not do or say things that will harm the reputation of the country.

He asked the citizenry, to quickly draw the attention of the Presidency when things are not going right at the grass root.

He stressed that we should build the country through unity and fellow felling, devoid of selfish tendencies.

The Omanhene of Dormaa Traditional Area, Osagyefo Oseadeeyo Agyemang Badu, made a litany of requests including the provision of roads, electricity, water and educational infrastructure.

His foremost request was for the road from Dormaa to Nkrankwanta to be constructed, since the area is a major producer of food and cash crops.

The Minister  of Lands and Natural Resources, Alhaji Collins Dauda, urged Nananom to  monitor how the common fund was utilized in their localities, saying it is only through monitoring that they could help bring development to their traditional areas.

Before that, a similar durbar had been organized to welcome Prof. John Evans Atta-Mills from the Western Region to Brong-Ahafo at Goaso, where Chiefs from within the Ahafo area, displayed their rich culture at the durbar grounds.

The President ended his tour yesterday at Nsawkaw and Techiman, where he addressed separate durbars.