Which is the most Corrupt Party in Ghana? 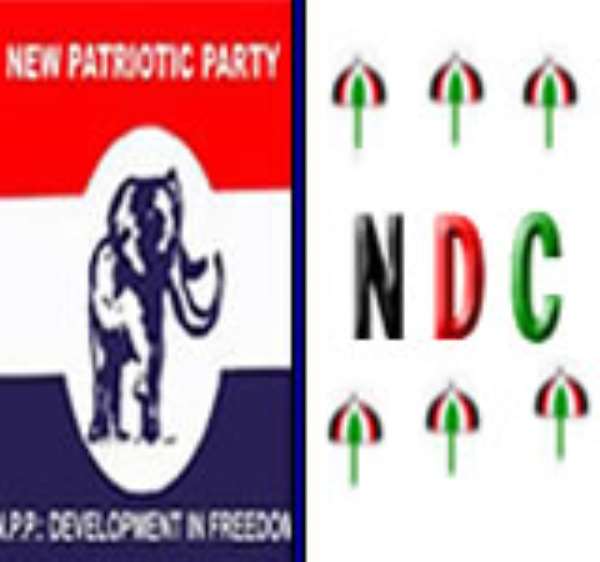 When they were in opposition the National Democratic Congress [NDC] members constantly accused the New Patriotic Party [NPP] of being corrupt and the accusations continued when President Mills government took office.

The NPP has been accused by the NDC for appropriating millions of dollars during the celebration of [email protected] The NPP has also been accused of making profits from the building of the Jubilee House built to house the presidency. The allegation has forced President Mills to delay moving into House.

The allegations against the NPP seem to go on by the day with P.C. Appiah Ofori a member of the NPP party going public to accuse Members of Parliament belonging to the NPP of receiving $5000 each during the sale of Ghana Telecom in which they were asked to vote to support the motion.

NDC also points out that the loan secured by the son of former president Chief Kuffour for the purchase of Hotel Kuffour was made only possible because of his father's position at the time.

NDC members further contend that Dr. Anane corruption saga in which he was investigated and exonerated points to deep seated corruption practices in the NPP.

NDC says the investigation of Asamoah Boateng over award of contracts in his ministry is a clear manisfestation of what the NPP is best noted for. NDC claims the arrest of former foreign minister Kwasi Osei-Adjei is another attestation of deep seated corruption among the rank and file of the former ruling party..

The NPP on the other hand has countered the NDC's accusations by pointing to the numerous massive corruption scandals that marked the 11 years of PNDC and 8 years of NDC rule. They point to recent revelations that suggest the NDC transition team spent a whopping 3.61 billion cedis on tea and water within two months. In I told you so style, members of the NPP have likened the level of corruption in the NDC to an advanced cancer that cannot be cured. They point to recent media report that the NDC spent one million new Ghanaian cedis (about 10 billion old Ghana cedis) during President Obama's visit and question how the NDC could spend such amount in just under 24 hours.

NPP also points to revelations in Nigeria and Ghanaian newspapers that the Governor of Rivers State in Nigeria Mr. Rotimi Amaechi paid $3.5 million to ex-President Rawlings which was used to bankroll NDC 2008 election campaign that brought them victory. NPP says such a high level corruption can only happen in the NDC.

NPP says the NDC is like a pot calling the kettle black and points to recent information in public domain that Mahama Ayariga the spokesperson for President Mills has illegally acquired five tractors meant for poor Ghanaian farmers. NPP say Ayariga took five tractors meant for underprivileged farmers and paid for only one whose price was further reduced for him.

NPP says the NDC top brass should shut their buccal cavity because they have no moral right to accuse its members of corruption. Members of NPP claim that NDC shady deals are everywhere for Ghanaians to see.

They have accused Muntaka of using his office as a house of charity for his family buying pampas, khebab and travelling around with his girl friend and asking poor people of Ghana to foot the bill. They point to Alhaji Muntaka Mubarak as an embodiment of NDC corruption.

The NPP further points to an ongoing corruption trial in Southwark Crown Court, London, United Kingdom in which a tiny family company called Mabey & Johnson of UK is believed to have paid $6 million to NDC party gurus in exchange for contracts. It has been revealed that the said corruption took place between 1994 and 1999 at a time when the current of the republic President Atta Mills was vice president with Rawlings as president.Source: The Statesman, 20 July 2009.

NPP says corruption allegation levelled at current Foreign Minister Alhaji Mohammed Mumuni is only a tip of a herculian problem and a practice which is so common in the NDC. NPP says an audit report from the Auditor Generals Office implicating Alhaji Mohammed Mumuni in financial malfeasance and wrong-doing makes the NDC and the government of Fiifi Mills a laughing stock in the eyes of the international community especially when it comes to negotiations in financial matters.

And as if that is not enough Nana Ohene-Ntow, the General Secretary of the NPP in a hot exchange with Kofi Adams called on Jerry Rawlings (the founder and a key member of NDC), to come clean if he is not corrupt. Nana Ohene-Ntow told Adams who doubles as the spokesperson for Rawlings and NDC Deputy Youth Organiser, "he [Rawlings] should tell Ghanaians how he got money to build his mansion at Agyirigannon, how he financed his children's fees abroad, and those who provided him the 4 wheel drive vehicles.If he fails to provide the hard facts, he should desist from disturbing the peace of this country". Source:peacefmonline.com, 7 July 2009.

With no ending sight to accusations and counter accusations of corruption and denials by the parties, it is only the people of Ghana who can be a good judge in determing which of the parties is most corrupt.

By Lord Aikins Adusei.
The author is Activist and Anti Corruption Campaigner and blogs at http://www.ghanapundit.blogspot.com