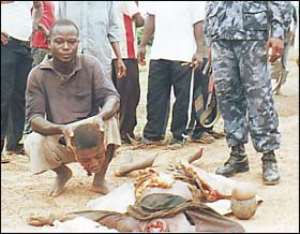 RESIDENTS of Ankaase, a farming community near Derma in the Brong Ahafo Region, were shocked to the marrow last Tuesday July 28, 2009, following the gruesome murder of a 14-year-old boy by his father for money ritual.

The boy, Paul, was allegedly beheaded by his father, a farmer who was known in the community only as Naa. The suspect, prior to the cold-blooded murder, had boasted that he was going to be rich very soon.

According to residents, Naa sacked his wife from their house in order to carry out the dastardly act.

Narrating the story to DAILY GUIDE, Kwame Nsiah, an elder of Yaw Manukrom, the farming community where Naa lived, said three days before the murder, the suspect drove his wife and her two-year-old son away.

He said Naa was a prominent yam farmer who normally sold his produce to a certain businessman from Accra.

On that fateful day, the businessman came to the cottage to buy yams as usual; and Naa, a Wala from the Upper West Region, picked a quarrel with his wife and drove her away on that same day.

A neighbour who stayed close to Naa's house, Maame Abena Nsoah, told DAILY GUIDE that she saw Naa escorting the boy into the bush in the night and wondered why he was going there at that ungodly hour.

She said the following day, she did not see the boy.

According to Maame Nsoah, the suspect suddenly started behaving abnormally. She said Naa, who was not used to drinking alcohol, started drinking Apketeshie and telling people that he would be rich within a week.

He even confided in a friend that the businessman who was in his house had introduced him to 'sakawa' and in a matter of one week, he was going to be fabulously rich.

His friend then reported the matter to an elder of the town who also asked Naa where his son was.  When Naa could not offer any tangible explanation, he was beaten up until he confessed to killing the boy.

The matter was reported to the Derma Police who arrested and made him show where the boy was buried. When the body was exhumed, the head was nowhere to be found.

The suspect told the police he had hidden the head in his house and that the businessman whose name he could not mention was to take the head to Accra to perform some ritualsfor him.

He was led to the house where the head was uncovered, but unfortunately, the businessman was nowhere to be found.

The case had since been sent to the Sunyani Regional Police headquarters for investigations.