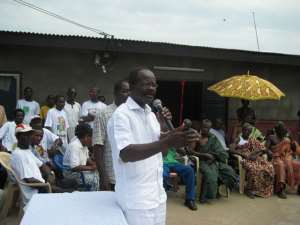 …”Our Fishing Communities Need Better Support”
There is an urgent call on the administration of President John Atta Mills to examine the needs of the fishing communities throughout the country and give them better support than they are experiencing at the moment.

The 2008 presidential candidate of the Convention People's Party, and fomer Member of Parliament of Komenda Edina Eguafo Abrem (KEEA), Dr. Paa Kwesi Nduom in a press release cautioned the NDC government to review the voting pattern of these communities particularly those in the Greater Accra, Central and Western Regions as an ample food for thought.

Dr. Nduom who hails from the coast of Elmina said in “the past few years, the fishing communities especially the ones in the Western, Volta, Greater Accra and Central Regions have experienced increasing poverty in all its forms. Consequently, many children in these communities do not go to school or drop out of school at early ages. It is for these reasons that some of us from coastal communities have had to carry an increased burden as advocates and investors to improve the life experiences of the affected communities”

The issue with premix fuel has been in the news this week, with most of the fishermen taking the government to task over failed promises of addressing their social and economic needs, that was not enough, they have had irregular supply of pre-mix fuel, activities of pair-trawlers, unsafe landing beaches and a general increase in the cost of fishing inputs affecting activities in the industry.

“Unfortunately, access to credit has reduced this year and when it is available, the cost of money has gone up. Therefore, the fishing community is facing severe financial difficulties. So the current pre-mix shortage that has lasted more than a week in many communities is worrying. It is making the poverty situation in the fishing communities worse. For some of these communities, the shortage has been experienced intermittently since the beginning of the year. What bothers some in the communities more and more is that they placed a lot of hope in the Mills Administration as it took up some of their concerns as priority matters during the 2008 elections” Dr. Nduom said.

“If care is not taken, the fishing communities will consider all politicians as non-caring as they believe that the previous administration did not help them as much as they had promised when they were in opposition.”

Dr Nduom suggested that since Pre-mix fuel is part of the items covered by the deregulation policies implemented by both the NDC and NPP Administrations, government should disassociate itself from its distribution as happens with other subsidized products such as kerosene. He expressed worry why with the formation of national, regional and local pre-mix communities still fraught with many challenges. He suggested again that, roles and responsibilities of political appointees if any at all must be made clear as opposed to that of the fishermen/women themselves.

“Pre-mix fuel though subsidized, is not provided free of charge. Like kerosene and others, the customers have to pay for it. Customers deserve good treatment and must not be treated as if they do not matter”.

“The important role of government should be that ensuring the security of pre-mix fuel and its availability and the safe delivery of the products to their intended destinations. The duties of the National Pre-mix Committee should be viewed with great caution by President Mills. There are opportunities for corruption and political patronage of the type that affects greatly the poor fishing communities. The re-emergence of this Committee gives cause for concern and its activities must be monitored closely by the Presidency. Government must know that the fishing communities do not much trust and faith in such committees.