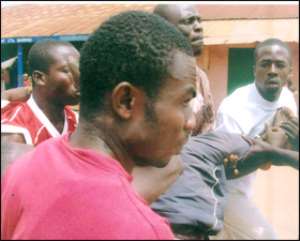 A nerve-racking state of insecurity was the order of day at Sankore in the Asunafo South constituency of the Brong Ahafo region on Sunday, July 19, when some thugs suspected to be activists of the ruling National Democratic Congress (NDC) went haywire, firing gunshots indiscriminately.

In the ensuing unprovoked melee, the alleged wild- looking NDC activists pounced on a certain Kwame Nyame, a 40-year-old mixed farmer, brutalized and shot him in the waist from a close range.

Nyame, who is a staunch member of the Deeper Life Church, met the unfortunate life-threatening incident right in front of the town's chief palace at about 11:30 am when he was returning from church service.

Information available to DAILY GUIDE indicates that the purported mutinous hooligans started running riot in the town on Saturday, July 18 during the final funeral rites of the wife of the driver of the chief of the town, Nana Okogyeadie Yaw Adusei III, who died in labour.

According to reports, the supposed NPP youth activists who attended the funeral had gathered in front of a popular drinking spot in the town when the ruffians without provocation launched the attack on them.

The purported NPP supporters, according to sources, did not retaliate but speedily ran to the chief's palace which is a stone throw from the place of the incident, and informed the chief of the uncalled-for attack.

The chief then prevailed on the supposed NPP activists to remain calm, promising that he would call the suspected thugs to order.

DAILY GUIDE gathered that the purported NPP supporters, who upon the coming into office of the President Mills government because of threats on their lives vacated the town but resurfaced due to the funeral, were sitting in front of a house opposite the chief's palace on Sunday, July 19 when the hooligans launched another attack on them.

Sources said the defenseless purported NPP supporters this time around, ran straight into the chief's palace to seek refuge.

As they did that, sources said the gangsters who allegedly wore a yellow T-shirt embossed with the picture of Eric Opoku, the Deputy Brong Ahafo Regional Minister who contested the 2008 Asunafo South parliamentary polls but lost to the NPP candidate, George Boakye, fired several warning shots in the air.

Before the chief could come out to bring the situation under control, the fully-charged NDC vandals pounced on and shot Nyame who was returning from church in the waist, wounding him severely in the process.

The alleged NDC ruffians, this paper has gathered, vanished into thin air after carrying out the dastardly act on Nyame, who sources say is not an active party activist though he relates to the NPP Member of Parliament for the area.

DAILY GUIDE learnt that two of the victim's blood brothers were among the purported NPP supporters were attacked on Sunday.

Meanwhile, reports reaching this paper indicate that a vulcanizing shop belonging to one of the brothers of the victim had been vandalized by the same hoodlums.

In a telephone interview with one Kofi Tawiah, a younger brother of the victim, he told DAILY GUIDE that the family had spent over GH¢1,000 on medical bills of his elder brother.

He noted that though they had spent four days at KATH so far, doctors had not indicated to them when his brother would be discharged, thereby raising fears that they might incur additional cost.

Emphasizing that they still received phone calls of threat on their lives, Tawiah called on the security agencies to protect their relatives and property back home to ensure that they do not suffer any further untold hardships.

Nana Okogyeadie Yaw Adusei III, when contacted on phone, confirmed the incident and noted that a combined team of the military and police had been detailed on the area to maintain law and order.

He disclosed that so far two persons had been arrested and detained in connection with the disturbances which nearly threw the peace and security of the town overboard.