Swine flu may cause seizures in children 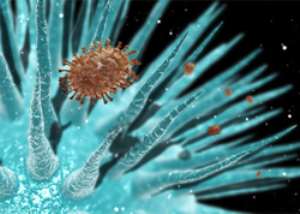 
The top public health officials in the US are alerting doctors that swine flu may cause seizures, after four children were hospitalized in Texas for neurological complications.

All four children fully recovered without complications after being treated at a Dallas hospital, according to a report released Thursday by the Centers for Disease Control and Prevention.

The announcement does not surprise doctors accustomed to seeing complications in the brain caused by the seasonal flu viruses that circulate every year.

“It's completely to be expected given that so far this novel H1N1 flu is behaving like the seasonal flu that we are familiar with,” said Dr. Anne Moscona, a professor of pediatrics and microbiology at the Weill Cornell Medical Center .

Parents should not be alarmed, Dr. Moscona said, but if they notice a change in their child's personality or behavior, like increased irritability or memory problems, soon after the onset of a respiratory illness, it might be swine-flu related and parents should alert their child's doctor as early as possible.

In the four children described in the disease centers' report, neurological problems, including seizures, confusion and delirium, followed the onset of respiratory symptoms within one to four days. The complications were less severe than those previously described in the medical literature as associated with seasonal flu, according to the report.

Neurological complications in children are among the most serious side effects of influenza, said Dr. Andrew T. Pavia, chief of pediatric infectious diseases at the University of Utah. Milder complications like seizures or brain swelling are moderately common, whereas death occurs in only a couple of cases each year, Dr. Pavia said.

Some flu strains are worse than others when it comes to causing brain-related complications, and scientists do not yet know how bad H1N1 will be, he said.

Most swine flu cases so far have been fairly mild, but many questions remain about the severe cases, like what complications are most likely and who is most likely to develop them, he said.

“The usefulness of this case report is that many doctors who deal with outpatient flu only may never have seen a case with neurological complications,” Dr. Pavia said. “It's an important reminder that flu can present as seizures or as encephalitis.”