What happened to the Quadafi visit? 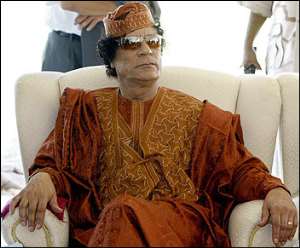 There was the sudden announcement that the anticipated visit of the Head of State of People's Arab Republic of Libya, Brother Muammar Qaddafi has been cancelled.

Until then, it was apparent that feverish preparations were being made towards the visit. The venues for some planned events were secured, hotel rooms booked, and we are told some people were paid consultancy or promotion fees to ensure that everything went on well for the august visit.

An advance party from the oil rich country, our information suggests, are already in the country as part of the contingency arrangement for the visit of Brother Qaddafi. So we ask, what happened? Why the late cancellation?

Investigations have shown that while some leading personalities in government were vehemently against the Qaddafi visit, there were others who were all for the visit. So if there was no consensus reached on the visit, why was a date fixed only for us to embarrass ourselves with the late cancellation?

The paper is aware that some influential Ghanaians are at the fore front of campaign and the backing of the decision by the Libyan leader to be the King of Africa. And therefore would be doing everything possible to scheme for such a visit, even if it has not received backing from officialdom.

The President met with former President Rawlings at the private residence of Mr. Rawlings behind close doors last Saturday and according to reliable information discussions between the two gentlemen centred on the abortive visit. So which one of them was in favour or not?

The involvement of many interested parties in the Quadafi visit, in our opinion shows the lack of governmental involvement and therefore the last minute ditch. From news reports, Ms. Samia Nkrumah, the CPP MP for Jomoro, the President of the National House of Chiefs, Prof. John Nabila and the Ministry of Chieftaincy Affairs were involved in the planning and promotion of the visit.

If this is true, we ask in what capacities?
Did the President of the National House of Chiefs have the full knowledge and the backing of his other colleague Chiefs to receive the recent Chairman of the African Union? Was he part of the reported plan to crown Quadafi the “King of Africa”?

Was the Minister of Chieftaincy and Culture really involved and if so did he have the approval of President Mills? If the President did approve, why would there be security and other concerns, raised at the last minute? Is it true that Quadafi wanted to come and launch the Kwame Nkrumah at 100 celebrations?

There are strong ties between Ghana and Libya and some expectations of further cooperation on energy, hospitality and other areas. So we must tread cautiously and treat all activities between our country and others very seriously.

In what capacity for instance was Samia Nkrumah involved in the aborted visit? If as Parliamentarian, was Parliament involved in the preparation of the visit of the Libyan leader? If as CPP member, was the CPP involved? Or was she acting as a lone ranger?

She must know that her father transcends his immediate family. So his name cannot be used to solely as anyone's personal property, nor can his heritage be traded on casually. That is why the nation and the AU are observing officially the Kwame Nkrumah @ 100 Anniversary.