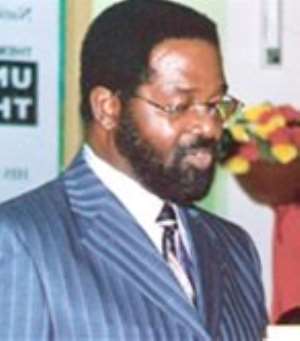 The Mayor of Accra, Alfred Vanderpuje has disassociated himself from the Daily Graphic story in the 17th of this month's edition which stated that the Accra Metropolitan Assembly has acquired a new site at Adzen Kotoku to resettle the squatters at Sodom and Gomorrah.  He said conditions at Sodom and Gomorrah are not conducive for living especially where the health of children is concerned.

He hinted that the Chiefs and people of Adzen Kotoku have confirmed that earlier plans by the former administration to move the people there did not materialize because of the alleged criminal activities of the squatters.  Mr. Vanderpuje was speaking on Current Affairs Programme FOCUS which discussed the problems hampering the completion of the Korle Lagoon Ecological and Restoration Project in Accra.

According to a Mechanical Engineer of the  Korle Lagoon Ecological Restoration Project, Godwin Azumah, about 98 percent of the  project has been completed.  But the presence of the squatters at Sodom and Gomorrah has brought the project to a standstill.  Mr. Azumah said apart from stealing machines for the project, the security situation is bad with some workers being attacked.  He called for immediate evacuation of the squatters for the project to go on.

The Chairman of Accra Plastic Waste Management Project, Ebbo Botwe said with immediate effect the authorities will enforce the AMA by-laws on people who are caught littering.  He appealed to the media to help educate the public on indiscriminate littering.A resident of Sodom and Gomorrah, Fredrick Opoku said residents fo the slum are willing to leave but called for enough time to enable them prepare to pack out.  He pledged that the exercise be given a human face.

Those were views of panelists on Radio Ghana's Current Affairs Programme FOCUS which looked at the problems hampering the completion of the Korle Lagoon Ecological and Restoration Project in Accra.