So who is Pro-Poor? 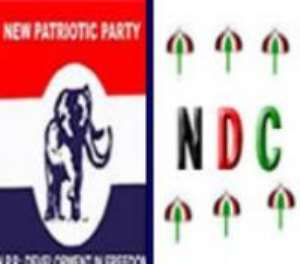 “In 2009 and 2010 income poverty could rise further, as per capita private consumption growth is expected to fall,” says a World Bank report on Ghana, dated June 15, 2009 .

The World Bank estimates that half a million more Ghanaians will fall below the poverty line by 2010.

The same report notes, “ Ghana recorded very significant poverty reduction between 1999 and 2006 . The estimated proportion of the poor in the total population went down from 39 percent in 1999 to 29 percent in 2006.”

By this World Bank forecast, the size of Ghana's population living in abject poverty should see a reversal of the trend and go up to at least 31% under President John Atta Mills in the next two years.

At the same time unemployed Ghanaians and young graduates hoping to get a job in the public sector are rebuffed by a two-year net freeze on public sector recruitment. In fact, more jobs are expected to be lost as the World Bank is demanding that by the end of September, half of government's subvented agencies (or parastatals), should be prepared for “rationalisation, commercialisation and divestiture.” There is a cunning resemblance to the programmes implemented under the Structural Adjustment Programme of the 1980s. The issue is how much work has the current government put in analysing the pros and cons of a policy that was not anticipated, if one goes by the NDC Manifesto 2008?

The said World Bank report on Ghana is for the Economic Governance and Poverty Reduction Credit of $300 million. While one cannot argue against the size of the amount and the rationale behind much of the conditionalities attached to this facility, the zealousness of the National Democratic Congress to claim that the conditionalities are home-grown and initiatives of the Ghana government raises fundamental questions and calls for greater inquiry about the social democratic credentials of the NDC.

In fact, a critical analysis of the PNDC/NDC regimes leaves the analyst in no doubt that the 8-year rule of the so-called right wing New Patriotic Party was more altruistic, egalitarian and pro-poor in their actions, if not in posture and propaganda.

The PNDC/NDC policy trajectory could be summed up as talking left and acting right or signalling left and turning right. Equally worrying is the constant overbearing influence of the Bretton Wood institutions between 1983 and 2000 and 2009- in directing the NDC away from their own pro-poor proclamations to neo-liberal actions which are often implemented without a seeming lack of a sincere spirit of economic liberalism on the part of the implementers. Thus, Ghana risks returning to the PNDC/NDC period of mechanic liberalisation without liberalism, where the business community felt disassociated from the liberal policies which were supposedly implemented to support them. The disconnection between what the NDC says and what it does and what the NPP says and what it does calls for greater public and academic attention.

For example, explaining what may give rise to an increase in income poverty for the next two years, the World Bank refers to the tight fiscal policy it has persuaded the Mills government to implement. It says, poverty will rise further “because the planned macroeconomic adjustment entails increased cost recovery in the energy sector and increased taxation, staff forecasts aggregate per capita private consumption growth to fall, which will result in income poverty rising by as much as 2 percentage points between 2008 and 2010 (an additional 500,000 people below the poverty line at US$1.25 a day) assuming unchanged income distribution.”

It is for this reason that the World Bank is insisting that the Mills administration expands the Livelihood Empowerment Against Poverty (LEAP). The World Bank says, “This [expected increase in income poverty] underlines the importance of protecting vulnerable households from the downturn in economic activity through targeted measures, such as a further extension of the cash transfer program, LEAP, to new beneficiaries and the protection of pro-poor public expenditures as the budget contracts.”

Meanwhile, under the New Patriotic Party, the World Bank admits that “all major regions recorded reductions in poverty,” with some achieving them much more rapidly than others. Unfortunately, the bulk of poverty has become concentrated in the three northern regions which now comprise about 80% of the poor. Efforts to address the special needs of these lagging regions had been initiated in the recent past, and there are “ongoing efforts to amplify them in the context of an ambitious Savanna Accelerated Development initiative which is supported by several Development Partners (DPs) including the Bank,” the report adds.

On the health sector front, the achievements over the last decade have been comparatively phenomenal. The last two demographic and health surveys (DHS) in 2003 and 2008 indicate this.

The World Bank admits, “The progress achieved over this period is impressive: under-5 mortality was reduced from 111 deaths per 1,000 births to 80, the proportion of malnourished under-5 children was reduced from 22 to 14 percent, and the proportion of medically assisted deliveries went up from 47 to 57 percent. Health progress results to a large extent from the creation and continued increase in coverage under the National Health Insurance Scheme (NHIS), reaching 12 million people by October 2008. Pro-poor progress during the 2007-08 food and fuel crisis was supported by public subsidies that paid the insurance premium due by the poor.”

Though the NPP has been portrayed by its political opponents as anti-poor, the World Bank admits that when “the domestic price of food rose substantially against that of non-food items between November 2007 and July 2008,” the Kufuor administration, went ahead to protect the purchasing power of the poor with “tax exemptions on fuel and food instituted in 2008 and still operational, and by a scaling up of safety nets (including additional health and educational benefits, a new program of direct transfers to the ultra-poor, and subsidies for fertilizers in food insecure regions).”

In the absence of any offsetting policies (e.g., tax exemptions, targeted transfers, etc.), World Bank staff estimate that food price inflation since 2006 could have increased Ghana's urban poverty rate (12% in 2005, at US$1.25 a day) by 1 to 3 percentage points.

However, the recent loans provided to Ghana by both the World Bank and International Monetary Fund are clear on what the Mills administration must do – get rid of the subsidies, implement full-cost recovery. The introduction of cost recovery mechanisms in the energy sector is expected in September 2009, through the implementation of the financial recovery plan, which is a major conditionality before the second tranche of the $300 million total EGPRC is released to government. The calculation is that without full-cost recovery government's plan to reduce the fiscal deficit would fail.

The 3-year $602.6 million IMF loan under the Poverty Reduction and

Growth Facility (PRGF) for Ghana, (approved on July 16, 2009) which seeks to support the government's economic program to tackle macroeconomic instability, spells it all out:

“The authorities' planned reduction of the budget deficit to 4½ percent of GDP in 2011, and below this level in subsequent years, will be critical to restoring public debt sustainability. To help achieve this fiscal goal, the authorities should ensure that petroleum pricing and utility tariffs allow for full cost recovery to avoid large subsidy costs. More effective control will also be needed over the public sector wage bill, and steps should be taken to modernize the tax regime and strengthen collection.”

The curious case of the NDC government's entire fiscal policy focus is that it is based on a mathematical calculation of Ghana's fiscal deficit which ignores income from a source which is also targeted to help bring down that very deficit in the future - divestiture!

It is yet to be clear when the recently announced 17% increase in public sector wages will take effect. Although, what seems clear is that it will not take retrospective effect. The government has set a budgetary target of under 12% wage increase. With annual average inflation expected not to fall below 18% this year, even if implemented this year rather than next year, the 17% increase in public sector wages is very likely to make the average public sector worker poorer this year and next year under the pro-people NDC than they were in the last five years under the pro-business NPP government.

The World Bank admits, “Ghana's public sector payroll stands as one of the largest ratios in Africa, where the average is at about 6%.”

The facts simply don't explain why in the public's mind, particularly before the 2008 general elections, the NPP was seen as more for the interest of big business only and the NDC cared more for the average Ghanaian. The gap between perception and reality is curiously high and detrimental to public understanding of government performance and in therefore helping the voter to make an informed choice.

For example, in 2008, the public wage bill increased by 38%. If you discount the annual average inflation rate of 16.5% this still leaves the Ghanaian public sector worker nearly 19% better off, with that amount of extra purchasing power from the previous year. On top of that Ghanaians looking for fulfilment of the NDC promise on jobs are better off looking elsewhere. No chance of the 8% increase in public sector staff witnessed in 2008 under the centre-right NPP.

The World Bank report is even more generous to the egalitarian credentials of the NPP. It says the 38% wage increase of 2008 reflects “a 20% overall wage increase (against an inflation rate of 15%), an 8% increase in staff, and a 6% grade inflation.”

This means that in the last two years, after his or her pay was increased to take care of rising prices in goods and services, the Ghanaian public sector worker was given 40% extra money to spend. The next two years are likely to see a 15% dip in the actual purchasing power of the Ghanaian teacher, nurse or police officer, if the current trend continues.

Political analysts say those who voted massively against the NPP included the 250,000 teachers across the country. Yet, according to the World Bank, “In the education sector, for example, wages went up by 10% each year in real terms over the 2003-2008 period. Wages increased even faster in the health sector over the same period.”

In fact, government workers were far better off than their counterparts in the private sector. “Controlling for individual characteristics (education, experience, etc.), unionized public wages are now at least 25 percent higher than in the non-unionized private sector,” the EGPRC report says.

The wage bill is a heavy burden on the country's budget, representing 49% of government revenue in 2008. The question then is this: why would a government that professes to believe in small government, fiscal discipline and is seen to care more for the elite than the masses be the government that rather implemented policies that were pro-poor and pro-pensioner than the government that says it believes in the social democratic principles of wealth distribution and welfarism?

The author is the Executive Director of Danquah Institute, a policy think tank in Accra. Contact: [email protected]

Research Findings
Powered By Modern Ghana
Opinion Poll On Economic Management And Voter Registration In Ghana
Position Paper On The Impact Of COVID-19 On The Lives Of Citizens And The Wayforward By Bongo, Wa And Kasena-Nankana West District Civil Society Organizations Platforms On Sustainable Development Goals
Survey: Significant Number Of School Children Not Learning
The Coronavirus Global Pandemic And The Government Of Ghana’s Measures: An Analysis By The African Centre For Health Policy, Research And Analysis
Before Coronavirus Relief Came, 68% of Student Loan Borrowers Were Worried About Making Payments
Letter To The Electoral Commissioner: New Biometric Management System And New Register
IMANI: A Review of Trade Facilitation Agreement Between the Government of Ghana and Ghana Link Network Services Limited for the Provision of a Fully Integrated Trade Facilitation and Customs Manangement System
Research About Female Genital Mutilation (FGM)
Feast or Famine? The truth about global prospects for growth
COVID-19 Updates Live Dashboard
TOP STORIES