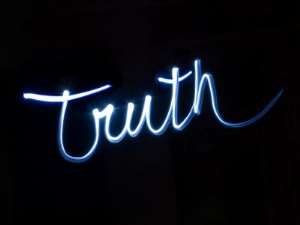 The truth is the same whether spoken by Barack Obama (US President), Wole Soyinka, Gani Fawehinmi, Femi Falana, Olisa Agbakoba, late Fela, Odumegwu Ojukwu (Ikemba Nnewi), Bala Usman, late Martin Luther King etc. The truth is also straightforward and progressive. Therefore when nations are prosperous, there are relatively high degrees of honest approaches to governance. Leadership can be smooth using the sincere approach to issues. People like honest societies. In the Nigerian situation, only the truth shall set us free and move us forward as a nation. Nigerians owe the country and our rulers the duty to tell them the truth. This is because truth is like a shining sun which will prevail over darkness. Honesty brings transparency which is a vital instrument in nation building. What Obama spoke in Ghana was simply to re-emphasize the obvious necessity for truth and to energize all the people fighting for change in Nigeria and Africa .

The truth is that the world has changed and will continue to change. Infact change is the only permanent thing in life. Nigerian leaders need to be aware that Nigeria is changing and that the present generation of Nigerians will hold them accountable for whatever they do. No matter the number of years, Nigerians will hold them accountable and where necessary put them behind bars or where they rightly belong. No one can destroy the future of Nigerians and expect to go free. The world is witnessing the trial of 89 year old John Demjanjuk in Germany for an alleged offence (Nazi camp guard) which was committed over 60 years ago. John Demjanjuk was deported in May 2009 from America to Germany where he is standing trial. Therefore when Obama said in Ghana that we have the power to hold our leaders accountable, he meant that Nigerians and African should take justice to the oppressors or bring our corrupt rulers to justice no matter the time it takes (I will not advocate jungle justice). It also means that leaders should be careful knowing what awaits them if they misgovern.

The truth is also that those who make democratic transitions and changes impossible make violent resistance inevitable. In 1992 when an election in Algeria which was won by Islamic Salvation Front was cancelled, it plunged the country into war. By the time the crisis ended, over 150,000 died. Attempt to manipulation elections in Kenya saw the deaths of over 1,000 Kenyans. The instability in Cote d Ivoire is connected with attempts to subvert the people's will. In Honduras , people are protesting the military take over of government. America is supporting the Honduran people, even though the ousted president is trying to pursue a different political and economic ideology (socialism) from America . As we approach 2011 elections, our “oppressors” either play by the rule or be ready to face the wrath of the Nigerian people.

Nigerians have been pushed to the wall for a long time and no more taking Nigerians for granted. Enough is enough. Nigerians want a good future and this is the time to start claiming that good future. History will be on the part of Nigerians who partake in the course of rebuilding Nigeria . I for one will do my best in this journey of rebuilding Nigeria . Am sure Nigerians will be willing to give their best when there is positive line of direction in this regard. A better Nigeria is in the best interest of all. Hopefully the west will support the struggle for good governance in Nigeria since what happens in Nigeria will have direct and indirect impact all over the world. Quoting part of Obama's speech in Ghana , “What we will do is increase assistance for responsible individuals and institutions, with a focus on supporting good governance”

Another truth is that our Nigerian leaders are afraid of the people they lead, otherwise there wouldn't be massive security personnel around them each time they move around. It's also another reason why they rig elections, because they can't stand the Nigerian masses. Tell me who among the present rulers will win any election under free and fair elections? Just recently the Senate President was campaigning for automatic ticket for all senators who are members of the Peoples Democratic Party (PDP). The simple reason is that given a level playing field they might not come to the Senate. The deputy Senate President (Ike Ekweremadu) in a separate interview said that the automatic ticket which members of the National Assembly are seeking, is for continued stability of the country. Nigerians know the truth.

It's also a basic truth that our rulers (past and present) are deaf and partially blind. They also surround themselves with sycophants who tell them what they want to hear. There is a big gap between the people and the government. Our rulers do not feel the pains and misery which they make ordinary Nigerians go through. They usually rent crowd or pay people to come to events to appear as if they are popular. Because they are deaf, they require a great deal of shouting and gesticulation. Because they are partially blind, that's why the country is being misled. Now is our time to start making changes. Just like Obama said in Ghana that, “ Africa 's future is up to Africans”. We the present generations of Nigerians must take our future in our hands.

Our opposition parties in Nigeria have not done very well, though I have to commend their plans to form a mega party to challenge the ruling party. But the truth is that there are still more jobs to do. Political parties need to outline programs they have for states and local governments. They need to mobilize Nigerians and increase electoral awareness. There is nothing wrong in educating people on how to checkmate rigging. After all there were some elections that could not be rigged in Nigeria . Proper voting could turn things around for the masses.

Another vital truth is that Nigerians have not fully realized the powers they have, both as individuals, collectively and as civil groups. Together and with a unity of purpose there is nothing the people of Nigeria cannot change. It's only that our elites who are part of our problem will always use divide and rule methods on the Nigerian people. Many of our elites are only after there selfish interest while pretending to be serving the interest of the majority. The civil society groups have so much they can do. In Thailand anti government protesters stormed the gathering of ASEAN (Association of Southeast Asian Nations) leaders in April 2009. The meeting ended abruptly and the ASEAN leaders fled. In Indonesia , the persistent street protest of students' partly led to the fall of former president Suharto. In Nigeria , the effects of NADECO were widely felt. In Rumania , peoples protest helped to change the government of Nicolae Ceaucescu. At the height of the cold war in Poland , the trade union activities helped to open up the country.

The knowledge and application of the truth will both benefit the leaders, the people and the country at large. Any thing short of it will still be the continued journey of deceit which is the order of the day in Nigeria . Hoping that all have listened. May God bless Nigeria .