80 Houses To Go Down - As KMA Begins Demolition In Kumasi 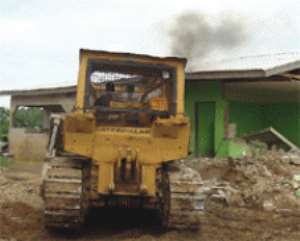 The Kumasi Metropolitan Assembly (KMA) yesterday commenced an exercise to demolish 80 unauthorised buildings sited on watercourses in order to stop what authorities described as human-induced flooding in the city.

On the first day of the operation, bulldozers pulled down 26 unauthorised buildings said to be on the course of the Owabi River at Kronum Kyekyire.

Forty-four other houses have been earmarked for demolition in the same area but the authorities are still vetting permits provided by the property owners.

Kumasi has had its share of the heavy rains which resulted in flooding in many parts of the country.

Three members of a family of four died at Kronum Kyekyire when their house collapsed on them following flooding after a downpour.

In addition to that, property worth thousands of Ghana cedis was destroyed in the area as a result of flooding.

Although some of the residents whose buildings were demolished said they agreed that the buildings were sited on the watercourse, they chastised the chiefs of the area for selling the land to them.

Many of them, especially the women, wept uncontrollably as he bulldozer shovelled their buildings, which they claimed had been constructed with money earned from many years of toil.

Some of them pleaded with the authorities to grant them a grace period to look for alternative accommodation.

Policemen were present to prevent any possible clash between the authorities and the residents who might have sought to stop the demolition exercise.

However, the exercise was carried out peacefully, as there was no resistance from any quarters.

The Kumasi Metropolitan Chief Executive (MCE), Mr Samuel Sarpong, who personally supervised the exercise, said all unauthorised structures would be demolished to help avert any more disasters in future.

He announced that the exercise would move into the heart of Kumasi, after Kronum, to areas such as Oforikrom, Susanso, Anloga and Airport Roundabout (Agye Boat) where some buildings are sitting on watercourses.

He said the assembly was taking the exercise step by step and that it was currently taking an inventory of all structures on watercourses in those areas as part of due diligence to check where there were no permits and such structures were obstructing the free flow of water.

Mr Sarpong said the assembly wanted to find a lasting solution to the recurrent trend and prevent situations such as happened in Accra.

The Kumasi MCE expressed the hope that the exercise would serve as a deterrent to other people who would want to flout the assembly’s bye-laws.

The Kumasi Metropolitan Development Control Officer, Mr Amoako Asiamah, told the Daily Graphic that the KMA would protect lands near water sources after the demolition.

He said those affected at Kronum Kyekyire would not get any compensation, since their buildings had no permits.

He said some owners of the remaining 44 buildings had provided permits given them by the Kwabre District Assembly and that the KMA was going to sit down with officers from Kwabre to assess the situation to find the way forward.

The flood situation in the country this year has been very serious, rendering many people homeless. President John Evans Atta Mills recently directed that all structures built on watercourses should be demolished to minimise the devastating effects of floods.

The President, who gave the directive after touring areas devastated by floods in the Accra metropolis, said flood disasters were preventable but it was human activities that sometimes led to loss of lives, property and displacement of people.