The danger with Muamua Gaddafi 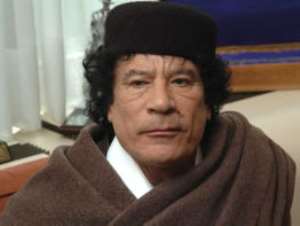 That Libya's leader Muamua Gaddafi is hot-headed is unassailable. That Muamua Gaddafi isn't in line with current African development thoughts is unarguable. And that Muamua Gaddafi doesn't understand Africa against the backdrop of his fickle-mindedness is clear to anyone who has been following him for the past 39 years. If supermarket tabloid journalism is anything to go by, Muamua Gaddafi is a clown in the African scene and some African leaders have followed to their perdition.

Despite this, some thoughtless African leaders follow him, dancing to the mercurial Gaddafi's whims and caprices, most times for money. Gaddafi's noise in Africa is because of Libya's oil wealth – remove the oil wealth and he is nothing in his desert wasteland. In Tripoli, some shallow-minded African leaders proclaimed the egocentric Gaddafi “King of Kings.” Why he is the “King of Kings” of Africa nobody knows why in an Africa where there is the hunger for grand thinking and philosophies that emanate from African culture, histories and predicaments. Most times while Africans attempt to move in one positive direction, the fidgety Gaddafi moves in diametrically different negative track.

Although just a few weeks ago the African Union (AU) held a summit in Sirte (from June 24 to July 3rd 2009) to discuss African pressing issues, the restless Gaddafi is coming to Ghana on July 21 to “discuss issues of African security and economic stability…” This is apparently to challenge US President Barack Obama's visit on July 11 that seek to shore up Ghana's and Africa's emerging home-grown democracy, freedoms and the rule of law for progress.

Regardless of the fact that military juntas (with their so-called “revolutions”) and one-party systems have caused grave developmental problems for Africa, from Ethiopia to the Central African Republic to Sierra Leone and Liberia, the megalomaniac Gaddafi says the “Rawlings Revolution, not democracy saved Ghana” and that “Ghana…was decaying in the annals of corruption as a failed post colonial state.” As much as everyone knows democracy did save Ghana and not any killings, deaths, exiles, threats, and harassments.

This not only insults Ghanaian pro-democracy forces that laid down their lives to help restore democracy, the rule of law, human rights and freedoms after years of Rawlings self-seeking revolution that caused deaths, killings, exiles, fear, paranoia, harassments, threats, unaccountability and massive corruption. By such wrong-thinking Gaddafi is also insulting Benin Republic's Mathieu Kerekou, who after years of military rule mired in Marxist-Leninist ideology, discovered that Benin cannot progress with military rule and restored democracy as vehicle for progress. Botswana attest to the current African believes that Africans need no bloody revolutions to bring about order, sanity and progress but democracy, freedoms, humans rights and the rule of law informed by Africans' indigenous values and institutions. Progress-wise in terms of development indicators, Botswana is the best country in Africa and not Libya.

Mired in the tangled past, where authoritarianism hold sway, and unable to free himself from autocratic tendencies, Gaddafi is known to endorse “direct democracy, as against Western multiparty democracy.” And he wants Africans to follow him in his muddled sense of direct democracy. The fact is if all the almost one billion Africans were to engage in direct democracy imagine the chaos that will ensure. Representative democracy isn't only Western but part of the broader human progress in resolving the challenges of governance. And in a continent with over 2000 ethnic groups and massively numerous ethnic languages, histories and cultures, the only logical and material solutions to such complexities is indirect democracy, fully driven by well crafted decentralization exercises cooked in Africa's traditional values and institutions.

Snubbed by the Arab world for his irritatingly erratic behaviours and for sometime a pariah among the comity of nations to the extent that President Ronald Reagan nearly bombed him to death, Gaddafi, for years, has shifted his ego trips to Africa where Africans tolerate his mumbo jumbo. Regardless of his avowed Pan-African believes, Gaddafi has been treating some African immigrants bad – deporting them, jailing some for their Christian practices, harassing some, threatening to execute some, among others.

For the past 39 years, Gaddafi has caused so much damages to Africa that it has become a game for him, blinding to the pains he has caused Africa. Gaddafi helped start the horrendous civil wars in Liberia and Sierra Leone (The Truth and Reconciliation Tribunal in Sierra Leone, short of charging him with crimes against humanity, requested him to pay compensation to victims of the civil war). Described by the late Ghanaian President Hilla Limann as having “hegemonistic intentions,” Gaddafi's anti-democracy stance saw him help the emotionally disturbed Ft. Lt. Jerry Rawlings topple the constitutionally elected Limann administration in 1981. Gaddafi is partly responsible for the messed-up in the near-collapsed the Central African Republic.

Demonstrating insensitivity to Africa's genocidal spots and Africans anguish in the hands of their notorious “Big Men” in places like Rwanda, Burundi, the Central African Republic, the Democratic Republic of Congo and Sudan's Darfur, Gaddafi was able to arm-twist fellow African leaders (except the level-headed Botswana) to support Sudan's President Omar al-Bashir who has been charged with crimes against humanity in the Darfur catastrophe.

Wrote the Nairobi, Kenya-based African Executive, “It is disgusting and appalling that African rulers congregating in Sirte (Libya) vowed to stand by Sudanese President, Omar Bashir. African rulers have once again proved to be hypocrites and indifferent altogether as far as human rights are concerned… Sadly, Rwandan strongman, Paul Kagame who claims to have stopped the genocide in Rwanda, too, concurred with this megalomania (Gaddafi) whilst his country suffered the same genocide as Darfur. It's unfortunate. Africa did not learn from what transpired in Rwanda.”

How Gaddafi, who has caused some insecurities in some African states, “can shore up security risk issues that Ghana expects to arise with the newly discovered oil wealth status, as well as discuss good and stable systems of governance for African nations and the continent as a whole” is mind-boggling. It is an indictment of Ghanaian intellectuality and Ghana's “Black Star of Africa” image.

Failing to read and acknowledge Ghanaians deep-rooted believes in democracy, their traditions and history as vehicles for progress and security, Gaddafi better concentrate on Libya where freedoms, democracy, human rights, and the rule of law are limited against the backdrop of coup attempts and assassination efforts on Gaddafi's life.