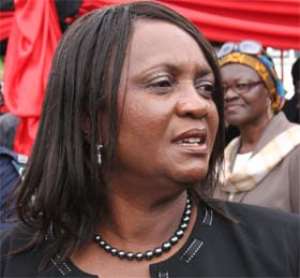 Five Supreme Court Judges led by the Chief Justice, Her Ladyship Justice Georgina Theodora Wood, have dismissed an application for review filed by a business man, Effah Sarkodie, after his earlier appeal claiming ownership of a parcel of land at Weija was dismissed.

The court declared that the appellant, FKA Company Limited, was the rightful owner of the disputed land as the Managing Director of FKA, Mr. Kofi Asare, had testified during the substantive trial.

In that trial, Mr. Asare stated that Weija Stool granted him the land in 1980, a claim Sarkodie did not challenge.

The Judges were of the opinion that Sarkodie even admitted that the land situated near the Waterworks belongs to the Weija Stool and that he (Sarkodie) was being led by the Amanfro Stool to have his conveyance regularised, adding that if Mr. Asare was given customary conveyance, then the stool had nothing to give him.

Regarding the issue of identity of the land, the Judges said the High Court where the case was initially heard appointed a surveyor who in his report in 2005 testified that about 85 percent of the land being claimed by Sarkodie fell within the land claimed by FKA cadastral plan submitted by Mr. Asare; and noted that the plan of the defendant, Mr. Sarkodie, had huge displacements.

In addition, the Judges stated that Mr. Asare obtained judgment against the elders of Amanfro which he tendered without objection from the elders, and noted that the High Court even ordered that notice be served on the elders to contest proof of title, but they failed to appear.

Furthermore, they said Mr. Asare tendered a letter of consent to sublet dated July 31st 2000 which contained the schedule of the land of the plaintiff measuring 95.149 acres.

The Judges argued that if Mr. Asare had not been granted the land, it would have been difficult for him to have been given approval to sublet and assign the land.

Explaining further, the Judges noted that it was after the death of the Weija Chief that the conveyance was made by the Mankralo of Weija to Sarkodie, and when the Wolomowas called to testify as a stool defendant, he said the plaintiff was being made a caretaker of the land.

According to them, that claim was highly improbable because as a stranger to the stool, Sarkodie could not be given such a large parcel of land; and observed that the only reasonable inference that could be drawn was that the elders of Weija colluded with the defendant after the death of the chief to deprive the plaintiff of his land.

The Supreme Court Judges maintained also that the testimony of the businessman was full of inconsistencies and this was evidenced by his claim that he had bought 64 plots from the chief but it later turned out that the number was 60, among many other inconsistencies, which did not help his case. They subsequently dismissed his application.