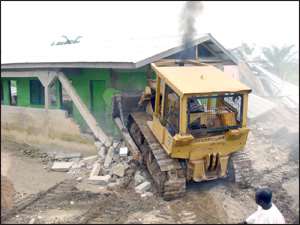 Kumasi, July 18, GNA- The Kumasi Metropolitan Assembly (KMA) on Friday demolished 10 unauthorized buildings constructed on waterways at Kronom-Kyekyire in the metropolis.
The KMA has marked 26 houses for demolition at the end of the exercise.
When the Ghana News Agency (GNA) visited the scene some affected landlords were seen wailing uncontrollably as others were busily salvaging their belongings to avoid destruction by the bulldozer pulling down the structures.
Agya Adu, who had lived in the area for almost 10 years, told the GNA that he was shocked by the action of the KMA since the assembly did not give them prior notice.
He condemned the assembly for being insensitive and said the exercise needed to be carried out with human face.
“They should have been given us time to look for new accommodation,” he said.
Mrs. Vivian Akumia, Kumasi Metropolitan Co-ordinator of the National Disaster and Management Organisation (NADMO), said the exercise formed part of measures to rid the metropolis of illegal structures, which had been the main cause of seasonal flooding.
She denied claims by the affected residents that they were not given prior notice of the planned demolition and insisted that all illegal structures would go.
The NADMO Co-ordinator pointed out that the exercise was to help to protect lives and water bodies.
GNA