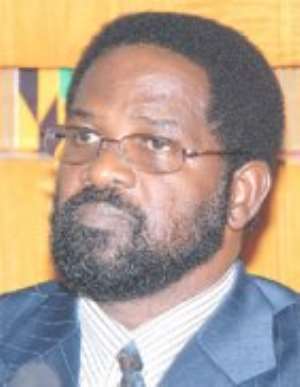 Sodom and Gomorrah, a slum within the central business district (CBD) of Accra, will be no more by next December as the Accra Metropolitan Assembly (AMA) says it has concluded plans to relocate residents of the place to a new site at Adzen Kotoku.

The Adzen Kotoku land in Ga West has been acquired and developed for the purpose and yesterday the Director of the Metro Public Health Department of the AMA, Dr Simpson Boateng, told the Daily Graphic about the urgency with which the assembly had to effect the relocation plan.

He pointed out that the persistent dumping of refuse and human excreta into the Korle canal by the squatters at Sodom and Gomorrah was undermining work on the Korle Lagoon Ecological Project (KLEP).

As a result of the intense pollution of the lagoon by residents of the slum, he said, the government was compelled to spend 5,000 euros daily to dredge and collect the waste generated by the squatters.

Dr Boateng, who was speaking with the Daily Graphic after an inspection tour of the KLEP by members of the Accra Plastic Waste Management Project (APWMP), said the relocation of the squatters was also part of the ongoing decongestion in parts of Accra.

Sodom and Gomorrah is inhabited mainly by traders and porters from different parts of the country and the slum is notorious for crime and filth.

Residents there stay in groups in wooden structures scattered around the area. Some of the structures have been put up at the edges of the Agbogbloshie and Korle canals.

These structures catch fire occasionally and allegations are rife that some of the most wanted and hardened criminals in the country use Sodom and Gomorrah as their hideout.

Work on the KLEP, which is to restore the ecology of the Korle Lagoon and improve the drainage situation in Accra, started in 1995 and was scheduled to be completed in 2005.

However, Dr Boateng said, the activities of the squatters had extended the completion period, adding, however, that the AMA could not give any time line.

All that he could say was that 'there is no end in sight' so far as the squatters of Sodom and Gomorrah continued to be there.

On the relocation, Dr Boateng said the AMA had registered 3,000 squatters and indicated that it was possible that more than that number would move to that area.

While admitting that the new site at Adzen Kotoku could not accommodate all the squatters at Sodom and Gomorrah, he made it clear that “the government is not under any obligation to relocate the squatters”.

He said the putting up of quarters at Adzen Kotoku to accommodate some of the squatters was an attempt to support the squatters.

According to the Project Engineer for Dredging International, Mr Gert Truyens, and the Project Supervisor for AMA, Mr Hillarius Ayidzoe, the activities of the squatters made their work more difficult.

They said they had been forced to use excavators to clear the waste generated by the squatters from the canal on a daily basis.

Consequently, Mr Ayidzoe said, work on the third phase of the project, which involves the creation of a recreational centre around the Korle Lagoon, had been stalled.

“So long as the squatters continue to stay here, the creation of the recreational centre cannot start,” he stressed.

The Chairman of the APWMP, Mr Ebow Boakye, said his outfit would fund the construction of traps on the Agbogbloshie, Odaw and Kaneshie canals to prevent the entry of solid waste into the Korle canal.

Besides, he said, the APWMP would collaborate with the AMA to arrest and prosecute persons who indiscriminately littered the city.