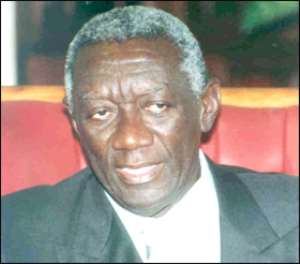 Former President left Accra Tuesday night for Belligio, Italy, where he is to be inaugurated into office as Ambassador against Hunger of the World Food Programme (WFP) of the United Nations.

The inauguration is planned to coincide with WFP's major strategic conference on School Feeding under the theme: 'Feed Minds and Changes' organized with the World bank and other multilateral organizations.

From Belligio, former President Kufuor will go to Oxford University, UK, to chair a strategic frame-work policy meeting and workshop as President of Alliance for Africa Foundation.