Can Mrs Rawlings and Mrs Kufuor ever be friends? 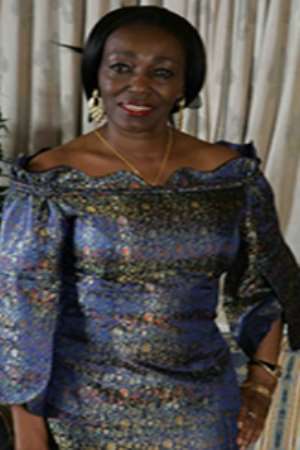 President Barack H. Obama has come and gone but he leaves in his wake memories that will forever linger on the minds of this generation probably until he comes back some day. I must congratulate the Atta Mills-led government for the very simple and down-to-earth manner in which activities celebrating Obama's historic visit to Ghana has been handled in face of obvious financial challenges that the country has been seriously plunged in.

Equally deserving commendation is the open arms with which His Excellency John Evans Mills embraced his political opponents including those who rated him undeserving of the office of president, to the tarmac of the Kotoka International Airport to welcome the visiting U.S President. This is what I call leadership; making the best of relationships and resources for the common good of the masses! The President did not submerge the opposition but rallied them around his good self in branding Ghana as an “adolescent democracy” in the eyes of the world. It is only in Ghana that competitors in a bitter election can quickly recover from their age old rivalries and come together for a common purpose on a memorable day as that of the visit of Barack Obama.

I heard from the grapevine that a very short aspirant from one party had to struggle to get to the front row in order to be visible enough to deserve a handshake. Rumours had it that President Obama, almost skipped him, until President Mills quickly tapped Obama to look below his waistline to see the vertically challenged political opponent. The short man eventually left embarrassingly to his “duty-free”4x4 car to avoid further mockery. One wonders if this blossoming romance extended from the bosom of the president to members of the opposition would have been the case if a different person save John Mills, was the occupant of the Jubilee House, the would-be seat of Presidency.

This indeed is a better Ghana that we are really experiencing, and we must all indulge in the credit. Yes, all of us whether one belongs to the coconut climbers, the chicken republicans or the elephant butchers or the Umbrella carriers. We all deserve the credit and I cannot agree with President Obama more when he stressed that “perhaps the minority deserves much commendation as the majority”.

The breakfast meeting between Obama, the President and the two ex presidents was the next attraction to the whole programme. There was life and humour amidst serious talk at that breakfast meeting that saw Nana Konadu Rawlings and Theresa Kufuor with their respective sweethearts, together on the same platform after a long period of unhealthy exchanges of cross-fire between the two former first gentlemen of the land. Again, I hear many “property-owning democratic” practitioners from the minority side were heavily disappointed at the menu served. Their disappointment, I hear, premised on the fact that their regular Ginseng-tea, toasted pancake, spaghetti sandwich, and fruit salad for dessert ,was totally missing on the tables but instead, there was lot of the Bukom-made transition kenkey, wakye, koko and “kose” and “kulikuli” for them to battle with that early morning. President Obama, a social-democrat as he is, was more than delighted to eat with the President and the two ex-presidents the available ration and did not visit the loo as many had wished. All these taste of domestication of the visit added serious colour, culture and an African courtesy to the entire programme. This is indeed a further in the cap of the Protocol department.

Soon after breakfast, Radio Gold and TV3 granted simultaneous interviews to the two Ex-Presidents. While Jerry Rawlings promised that the perceived “bad Blood” between himself and John Kufuor will be dealt with, John Kufuor quickly jumped in to say that there was no “bad blood” between the two of them. Jerry Rawlings and John Kufuor might not be enemies but there share different political ideologies and that makes them political opponents. We may have our internal differences as individuals and sympathizers of different political parties but when it comes to forging a common tie to project the image of Ghana beyond our borders, it is imperative for government to do all she could possible to put the two gentlemen on the forefront. Tasking them with specific roles to play on behalf of government in order to harness their contributions to the common good of the nation will not be too little too late.

To President Mills who is held in high esteem by the international community for his commitment to the rule of law and freedom of speech, multi-party democracy, and his readiness to combat corruption, drug-trafficking and ostentatious lifestyle as a sitting head of state, Obama's visit is a real exercise to legitimize your office and our “adolescent democratic” credentials of Ghana.

Mrs Konadu Rawlings and Mrs Theresa Kufuor might not be friends but in times as these when we need each of them to play one role or the other to support the development agenda of the nation, appointing the former first families as ambassadors of one government initiative or the other under the Mills administration will be very rewarding and a major plus to our “adolescent democracy” in order to attract major and minor policy advantages from all over the world so that we can perpetually remain on top as the beacon of democratic hope to a continent bedeviled with undemocratic regimes, crime, hunger, wars and diseases.

A move in this direction from His Excellency the President, assures any sitting president that upon a peaceful transition and handing-over, one does not only retire , sit at home on a “Chinnery-Hesse” report and tell mythical tales to his grandchildren but one is equally useful and respected as an ex president to partaking in the activities of the successive government. This will discourage the temptation of doing all one could, fair or foul, to perpetrate his party in office. The Vladimir Putin example in Russia is worth noting.