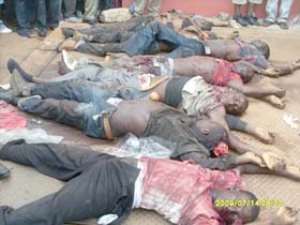 EIGHT SUSPECTED highway robbers were shot to death whilst a police man sustained an injury during a fierce gun-battle between armed-to-the-teeth robbers and security agents on Monday evening.

The male robbers, who were part of a 12-man gang, had blocked the Anwia Nkwanta to Bekwai main road in the Ashanti region with concrete blocks, and were robbing passengers of their valuables when the police stormed the scene around 7:00 pm upon a tip off.

In a Hollywood style, the gun-toting robbers immediately opened fire on the police officers, forcing the security agents to fire back, resulting in the mass casualties.

Four of the robbers, suspected to have sustained gunshot wounds, managed to flee with their injuries and might be hiding in the thick bushes around the crime scene.

So far, only Ahmed Boakye, who was standing trial at the Kumasi High Court in another robbery case which took place at a filling station at Effiduase on April 22, 2007, had been identified among the dead.

The identity of the seven other dead robbers were not known as at the time of filing the report on Tuesday morning, as no arrest had been made in connection with the incident.

The bodies of the deceased persons, suspected by the police to be of Fulani extraction, had been deposited at the Komfo Anokye Teaching Hospital (KATH) morgue in Kumasi.

The injured police officer (a driver), who was shot in the hand and whose name was not disclosed for security reasons, was said to be responding to treatment at the same hospital.

Briefing the press, the Ashanti Regional Police Commander, DCOP Patrick Timbillah, appealed to health institutions and the general public to be on the lookout and call for the arrest of anyone sighted with gun-shot wounds.

The shooting to death of eight suspected robbers, he observed, lent credence to the police's earlier promise of working hard to flush out crime from the region to enable residents to go about their activities freely without fear.

He noted that highway robberies were gradually becoming the order of the day in the region, citing a recent one on the Asonomaso to Adawomaso road where some passengers were robbed of their valuables as a case in point.

DCOP Timbillah sounded a word of caution to robbers in the region, urging them to engage in new legitimate professions because the police were determined to make life unbearable for them, noting, “The police will take the war to the robbers henceforth”.

According to him, combating crime was a collective responsibility of every citizen, so he passionately appealed to the general public to volunteer information leading to the arrest of criminals.

The police, he maintained, would shield and in some instances, give monetary packages to anyone that provided valuable information leading to the apprehension of hoodlums that constituted nuisance to law-abiding citizens.