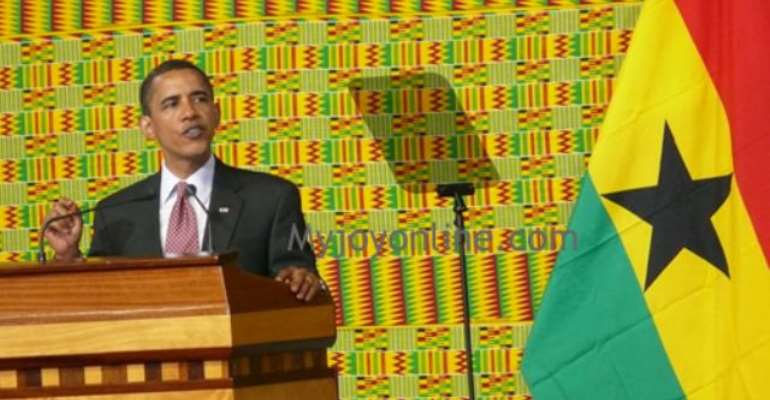 Barack Hussein Obama, a great son of Africa and a towering iconic African American figure has just visited Ghana and the whole country and has been engulfed in frenzy but after the euphoria has died down we would have to reflect and count the costs and benefits of this historic visit. Nonetheless, economic, social, political and touristic benefits will be derived in the short, medium and long terms. The fact is other America leaders like John Kennedy, Bill Clinton and George Bush Jnr., have visited the country in the past so what is so different about Obama's visit?.

Obama is the first African American president of the USA and he has chosen Ghana, the first country south of the Sahara to attain independence as his first point of call in sub-saharan Africa during the first year of his reign as president. This is the icing on the cake for Ghana in her efforts at attracting the African American tourist and investor. By visiting Ghana and the Cape coast Castle, Obama has endorsed Ghana as a preferred African American tourist destination. He articulated this fact after his tour of the Cape Coast Castle by calling on his fellow African Americans to visit the castle because though on the one hand it represents sadness, on the other hand, that is where the journey begun.

The relationship between Ghanaians and African Americans dates back to the pre-independence era. First, it has been established that Ghana alone providing about 16% of the total slave output required in the USA from 1620 to 1807. One can safely conclude that a significant number of African Americans are our kith and kin. Indeed African Americans like the legendary Jazz musician Louis Armstrong and Isaac Hayes who was enthroned as Nene Katey Ocansey I of Noyami, have traced their roots to Ghana. Though in the past African Americans traced their roots to African countries out of emotion, recently DNA test is helping them to trace their true ancestry as in the case of Lyndra Marshall from Maryland who is now encouraging others to visit and invest in Ghana after a DNA test proved that she was an Ashanti. President Obama is obviously not Ghanaian but his wife Michelle could be and this makes her visit to the Cape Coast Castle, one of the remaining testimonies of the Transatlantic Slave Trade significant.

Kwame Nkrumah's efforts at making Ghana the territorial base of the Pan African movement coupled with the development of Ghana's traditional arts endeared him to some prominent blacks in the Diaspora, prompting people like Maya Angelou, Malcolm X, Richard Wright, Sylvia Boone, Julian Mayfield and W.E.B Dubois to visit and stay in the country. Kwame Nkrumah positioned Ghana as the black star of Africa Some state resources were branded with the 'black star label' proposed by Marcus Garvey; Black Star Line (the state shipping line), Black Stars (the national football team) and Black Star Square (now known as the Independence Square).

Today, there is an African American community of more than a thousand people in Ghana partly due to the efforts of successive governments. We have also had prominent African Americans like Rev. Jesse Jackson and Louis Farakhan visiting the country. The African American community in Ghana celebrates events which originate from the black diaspora, such as the Black History Month and 'Juneteenth' in Ghana. In 1999, Ghana was chosen as the venue for the Africa African American summit which attracted more than 3500 delegates and 19 nations, including some 1000 African American. Also, in November 2001, the parliament of Ghana passed legislation, 'The Right to Abode' act which allows any person of African descent in the Diaspora to live and work in Ghana indefinitely. Under the Rawlings administration, there was a symbolic return of the mortal remains of two slave ancestors back to Ghana through the 'door of no return' of the Cape Coast Castle and the introduction of the Pan African Historical Theatre Festival (PANAFEST) as well as Emancipation Day to reinforce Ghana's position as a destination for the black diaspora. President J.A Kufuor also launched Africa's Golden Gateway Project in Washington aimed at stepping up Ghana's efforts at attracting American investors and tourists and the 'Joseph Project' to encourage African Americans to return to the homeland at least for a pilgrimage and to reconnect with their roots.

Blacks of African ancestry form about 13% of the American population. They represent a growing population not only in numerically but in terms of their purchasing power. This implies a greater propensity to travel to destinations like Ghana to rediscover their roots. The fact that African Americans trace their origins to Africa and Ghana, offers the opportunity for 'Roots Tourism' in Ghana. Incidentally the majority of them want to know more about Africa. African-American roots tourism was inspired by Marcus Garvey's “back to Africa” movement and the Alex Haley's 1976 best-seller 'Roots' which was also developed into a motion picture. Since then, Ghana has witnessed a number of African American tourists visiting the country but there is still a greater majority of African Americans who do not know much about Ghana and the little they know is often untrue. This situation is partly accounted for by the selective crude and negative publicity given to Africa by the international media.

Ghana abounds in heritage attractions connected with the Transatlantic Slave Trade and the pan African movement. Of the 45 forts and castles built by Europeans on the west coast of Africa, 32 are in Ghana. From Gwollu in the Upper West Region to Elmina in the Central Region, Ghana is replete with landmarks, edifices and relics connected with the Transatlantic Slave Trade. Also, the Dubois Centre and Padmore Library have been established to promote Pan Africanism and strengthen Ghana African American relationship. More importantly, the diversity of culture and the hospitality of the people constitute the greatest assets for the promotion of African American Roots tourism.

Some people have started predicting a tourism boom on the heels of Obama's visit but there is the need for cautious optimism. The already heightened expectations of Ghanaians should be managed. There are Issues that need to be addressed to maximize the benefits of tourism to both African Americans and the people of Ghana. African Americans are looking for a healing by reconnecting with their ancestors and discovering their true identity. The host populations in places like Gwollu, Salaga, Techiman, Assin Manso and Cape coast are also yearning for income streams and an improvement in their socio-economic circumstances. This can be realized if African Americans are accorded the proverbial Ghanaian hospitality and seen by Ghanaians as brothers and sisters rather than strangers or 'obronis'. They also want the truth about the Transatlantic Slave Trade to be projected and have not taken kindly to the 'whitewashing' of the slave castles in the past so I was surprised the same thing was done during Obama's visit.

The host communities located along the slave route also want the dollars spent by African Americans to trickle down to them. The argument that tourism eradicates poverty has always been put forward by successive governments to rationalize tourism development. In spite of this, the Central Region which is generally regarded as the tourism heartbeat of Ghana still remains one of the poorest regions in the country though it continues to attract a lot of tourists including African Americans.

The attainment of a win-win situation should begin with properly positioning Ghana on the minds of African Americans. Ghana must recognize the African American market segment as a niche market and accord it the needed marketing attention. Advertising in the international media is such an expensive venture. The presence of Obama in Ghana offers us the opportunity for free publicity with the international media spotlight focused on Ghana. It must however be mentioned that this is not the first time a US president is promoting Ghana. President Bush did a similar thing with 'the presidential tour' which was showed on international TV channels.

It is however an undeniable fact that Obama sells. A town in Japan known as Obama is cashing in on Obama's appeal through re-branding. Ghana can also ride on the back of Obama to reach out to African Americans. Ghana is a treasure trove of historical resources like slave castles, relics, monuments and events more than most of the other countries connected with slavery and these could be harnessed to position the country along the Slave Roots just as Egypt has also capitalised on its pyramids, Pharoahs and other rich historical resources to effectively position itself as 'the cradle of civilisation'.

In a similar vein, the host communities should also be repositioned to earn some of the tourist dollars by providing goods and services to the tourists. These people could be supported with financial and technical support to enable them meet the demands of African Americans. But for them to be successful, the tourists would have to patronize local goods and services. The difficulty is that most of these African American tourists buy a tour package which subjects them to the dictates of their tour operators. Their expenditure on accommodation, transportation, food, entertainment and sometimes even handicraft is determined by the tour operator. The local residents see these tourists all the time in their communities yet the truth of the matter is that they leave little money in the domestic economy. They usually stay in Accra and take a day trip to Cape Coast for instance.

Ghana cannot lay a singular claim to the Transatlantic Slave Trade and its landmarks. Other West African and North African countries took active part in it, so to present the complete picture; there is the need for collaboration with other countries to provide a multi-destination itinerary. A slave tour which will take our African American brothers and sisters to places like Abomey, Badagri and Goree Island and back to Cape Coast and Elmina will greatly enhance the quality of the tourists' experience without dissipating the fact that Ghana played a very significant role in the Transatlantic Slave Trade.