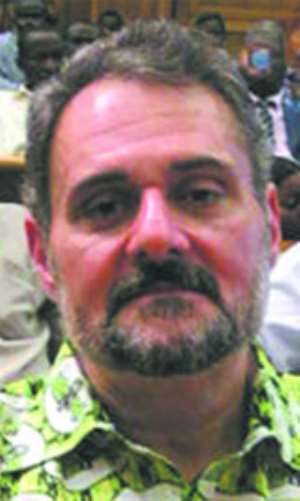 A Preliminary objection raised in respect to the Directors of Kasapa Telecommunications Limited was overruled by an Accra High Court, where the Mobile telecommunication service provider had brought a contempt of court proceedings against Westec Security Systems (Gh.) Limited, and its Chief Executive, Mr. Kwame Sarpong.

According to the court, the supposed irregularities as mentioned in the letter written by Mrs. Jemima Oware of the Registrar General do not change the records of the company.

Counsel for Kasapa Telecom, Mr. Divine Letsa of Bentsi-Enchill, Letsa & Ankomah law firm yesterday told the court in his submissions to cite the respondents for contempt of court that the Registrar General had brought a letter debunking a search report of April 17, 2009, that indicates that Mr. Kwame Sarpong and four others are the current directors of Kasapa Telecom Limited.

Mr. Letsa argued that the Registrar General's communication addressed to Mr. Robert Palitz, the embattle Managing Director of Kasapa Telecom indicates that there were some irregularities in the filing of documents at the registrar of companies that suggests that Kludjeson International Limited is the sole shareholder of 20Million ordinary shares, with Prince Kofi Kludjeson, Prince Kwame Kludjeson, Prince Mawuena Kludjeson, Kwame Sarpong and Winfred Kumah Apawu as Directors of the mobile telecom service provider.

In a sharp rebuttal, counsel for the respondents, Mr. Eric Agbolosu of KZAN law firm, in accordance of the law, indicated that the failure to comply with requirements or process of the rules is not treated as irregularities or a nullity.

However, the court overruled the submissions of counsel for the applicant, noting that the purported irregularity made by officers of the Registrar General in filing documents on the company does not change the records of the mobile service provider at the registrar of companies.

The contempt of court application brought against Westec Securities and its Chief Executive came about following a purported invasion of the offices of Kasapa Telecom Limited. According to Mr. Letsa, there was an interim injunction ordered by an Accra Circuit court in 2001 against the respondents from interfering in the activities of the company.

Counsel argued that the actions of the respondents amount to the disobedience of the direct orders of the circuit court, given over 8 years ago, noting that the respondents invaded the Abelenkpe and the Airport offices of Kasapa Telecom Limited.

Mr. Letsa further indicated that on the suit was still before the circuit court and not struck out or withdrawn, it is by law valid, and therefore the interim injunction given eight years ago cannot elapse in law.

Counsel also noted that the fact that a motion had been filed to extend the interim injunction within 30 days of the initial injunction, preserves the restraining order already given by the court.

Counsel was of the view that the absence of the pendency of the court process before the circuit court was immaterial, stressing that the respondent could not have been at the premises of the mobile telecommunication company by an innocent purpose, but intentionally to interfere in the court process.

In this regard, counsel said the respondents have flouted all the orders of the court and by so doing brought the administration of justice into ridicule and contempt.

In his response, counsel for the respondents, Mr. Eric Agbolosu argued that the applicant is by law responsible to establish a prima facea case against his clients for contempt of court.

According to Mr. Agbolosu, it is a falsity for the applicant to claim that the suit filed eight years ago at the circuit court is still pending after the process of that litigation had been stalled after an interim injunction had bee given.

Counsel pointed out that from 2004, no notice had been served on his clients that the case was still pending before the court as required by law, that at most within a year notice should be served by applicants to the respondents on the pendency of the case.

Mr. Agbolosu was of the view that an ex-parte application should not remain in force for more than 10 days as required by law, stressing that after 30 days if the interim injunction was not extended then the restraining order fails to exist in law.

According to counsel, his clients were not aware of the pendency of the case in court since the “suit had elapsed long ago”.

He therefore requested the court to dismiss the application for contempt of court brought against his clients since the respondents have not committed any such offense.

Delaying To Release Seed Funds For Purchase Of Cocoa Unprece...
51 minutes ago

Buhari Must Show Willingness To Dialogue With Protestors – A...
51 minutes ago