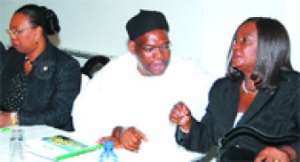 Mrs Wood (left), Chief Justice of Ghana, having discussions with Dr Abdullahi Shebu (middle), the Director-General of Intergovernmental Action Group Against Money Laundering in West Africa With them (left) is Mrs Betty Mould-Iddrisu, A-G A robust and independent judiciary of impeccable integrity has been identified as Africa’s answer to corruption and other economic crimes.

To help win the fight against such crimes, judges have been advised to appreciate the magnitude of the prevalent criminal activities to enable them to approach their duties with renewed passion, integrity and commitment.

The advice was given by Ghana’s Chief Justice, Justice Georgina Theodora Wood, at the opening of a five-day seminar on Economic and Financial Crimes for Judges from English-speaking countries in West Africa.

The seminar is the second of its kind for judges of ECOWAS member states and was organised by the Inter-governmental Action Group Against Money Laundering in West Africa (GIABA).

It was chaired by the Senior Circuit Judge of Royal Courts in the United Kingdom, His Honour Judge David Mackie.

Forty-five participants attended the seminar, which was on the theme: “The Role of the Judiciary in Combating Corruption, Financial and Economic Crimes”.

Delivering the keynote address, Justice Wood said corruption undermined judicial systems around the world, denying citizens their basic human rights and access to impartial trial and qualitative justice that was timely and fair, adding that “in worst case scenarios, some are denied trial”.

Touching on money laundering, the Chief Justice described it as a huge global challenge which had made all countries vulnerable.

She pointed out that money laundering allowed all sorts of criminals, including drug traffickers, terrorists, illegal arms dealers, fraudsters, tax evaders, corrupt bureaucrats, political figures and public office holders to transfer the proceeds of their crimes without being detected.

“We must work out the strategies to curtail this canker which has the potential of damaging our financial institutions and hampering foreign investment,” she stressed.

For her part, the Attorney-General and Minister of Justice, Mrs Betty Mould-Iddrisu, said to fight corruption, Ghana had prepared an anti-corruption manual which provided comparative analysis of the anti-corruption laws in Ghana with the United Nations Convention Against Corruption and the African Union Convention on Preventing and Combating Corruption and urged others to emulate.

The manual, according to the minister, provided Ghana with analysis of the two international institutions that helped plug loopholes in the legal framework, as well as provided easy access in one place to all the legislative provisions in the statute book on corruption.

She described money laundering as an act to conceal or disguise the identity of illegally obtained proceeds so that the proceeds appeared to have originated from legitimate sources. “It involves ill-gotten gains,” he added.

She reiterated that the activity undermined the legitimate private sector, caused loss of control of economic policies and capital flight, as well as loss to government revenue and economic distortion.

“It affects the national reputation, corrupts the financial system and undermines social values. Money laundering demonstrates that crime pays. It also promotes corruption and leads to an increase in crime generally.”

In his opening remarks, the Director-General of GIABA, Dr Abdullahi Shehu, called for an efficient and effective judicial process to avoid the effects of lose of confidence in the judiciary by the general public.

Making use of the axiom “justice delayed is justice denied”, Dr Shehu said “in some of the cases decided in the courts in our region which have taken several years to conclude, I have seen that although justice is done, justice is delayed, leading the average man on the streets to wonder if our judicial process is really effective”.

Stressing on the changing nature of financial and economic crime, he said as the international initiatives were being developed to deal with the problems associated with crime so were the criminals adapting to new methods.

He also said as such the money laundering methods and techniques had changed in response to the counter measures developed at the national and international levels and that it was in that regard that the Financial Action Task Force (FATF), an international body responsible for setting international standards against money laundering, had fundamentally revised the 40 recommendations that were developed in 1990.