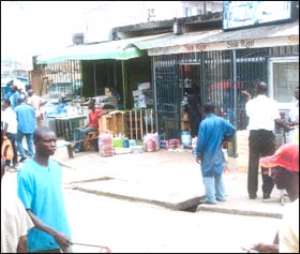 The family of Colonel Kwadwo Damoah, former Director of Manpower/Personnel of the Ghana Armed Forces, is in for what can be described as double agony.

In the heat of the seemingly endless persecutions visited on the colonel since January this year, indications are that more trouble awaits members of his family.

A team of policemen, led by one Inspector Quaye, yesterday raided the shops of his wife, Mrs. Paulina Damoah, and in a Rambo style, threw out everything on the streets, with the claims that they were effecting a court order to get her out of the place.

According to eyewitness accounts, the police arrived at the Kokomlemle premises of Brentpal Enterprises in three vehicles (one of them with registration number GP 2239) yesterday morning, and acting as though they were court officials, ordered the occupants to vacate the structure.

DAILY GUIDE gathered that a week before the police raided the place, some chaps, suspected to be security agents, went to interview owners of nearby shops about the Damoahs.

“They came here last week and asked us a number of questions about Mrs. Damoah. They even asked for the registration number of her car. I am surprised they are after the woman too,” one of them lamented.

The paper gathered that the building that housed Brentpal Enterprises had for sometime now been litigated over by two factions until judgment was given recently.

Interestingly, occupants of the building were not given any ejection notice ahead of yesterday's swoop by the police and a court bailiff.

When the paper got to the scene, some public-spirited neighbours were seen assisting the woman to pack a number of home appliances which were thrown in the open and left at the mercy of the weather.

Colonel Damoah first came into the news in January 2009, when after cancelling the 2008 recruitment into the armed forces, a Board of Inquiry (BOI) was established to try him.

He contested the composition of the BOI, and not long after, pieces of signals picked up indicated that there were plots to eliminate him.

For several days, his whereabouts were not known with reports saying some armed persons attempted to raid his residence. This led to a series of demonstrations at his home region of Brong Ahafo.

Then on 24th April 2009, the Chief of Army Staff, Major-General J.N. Adinkrah, wrote to notify him of his release from the army. Part of the reasons was that media publications on his predicament had embarrassed the military establishment.

“It is proposed to recommend your release from the Ghana Armed Forces for the following reasons: a.    Services no longer required, Several media publications on you have placed the service unduly into public domain, and thus brought the name of the Armed Forces into disrepute,” the confidential letter, with reference number ARMY/ 6623/ ASEC, noted.

An observer described Mrs. Damoah's predicament as an interesting coincidence with that of her husband's.