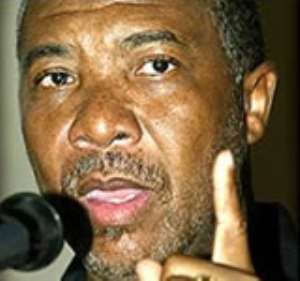 
Charles Taylor, the former president of Liberia, has taken the witness stand for the first time at his war crimes trial in The Hague.

He dismissed the prosecution's case as "lies and rumours".

He denies 11 charges at the Special Court for Sierra Leone, including terrorism, murder, rape and torture.

He is expected to argue he could not have micro-managed a rebel operation in Sierra Leone, while also running affairs of state in Liberia.

Mr Taylor is the first African leader to be tried by an international court.

His testimony is expected to last several weeks.
Claire Carlton-Hanciles, of the court's defence office, told the BBC on Monday that Mr Taylor was ready to defend himself and had been prepared for the past six weeks by defence lawyers.

The defence for Mr Taylor, 61, began on Monday. His lawyer Courtenay Griffiths told the court that Mr Taylor had tried to broker peace in Sierra Leone.

"We do not take issue with the fact that terrible atrocities occurred in Sierra Leone," he said.

"This case should not be about what happened in Sierra Leone, but who bears the greatest responsibility, bearing in mind that Charles Taylor tried to achieve peace."

Mr Griffiths added that the prosecution's case was based on unsubstantiated rumour and hearsay, and that Mr Taylor now wanted to put the record straight.

Mr Taylor has sat in the courtroom, housed in the International Criminal Court building in The Hague, for months, occasionally passing notes to his counsel and holding whispered conversations with him.

In May, judges rejected a request by Mr Taylor's defence team to acquit him because of a lack of evidence.

The RUF was notorious for using machetes to hack the limbs off civilians. Some of the prosecution's 91 witnesses gesticulated in court with amputated limbs - their hands had been chopped off by rebel soldiers.

Mr Taylor is accused of passing guns to the RUF in exchange for diamonds from Sierra Leone.

But his defence claims that Mr Taylor did not command RUF rebels in Sierra Leone, sell them weapons in exchange for blood diamonds or recruit child soldiers.

Mr Taylor started a civil war in Liberia 1989, before being elected president there in 1997.

After a period of exile in Nigeria, he was eventually extradited from Liberia in 2006.

The trial, being held by the UN-backed Special Court for Sierra Leone, was moved to the Netherlands from Sierra Leone's capital, Freetown, amid fears it could create instability in the country and neighbouring Liberia.