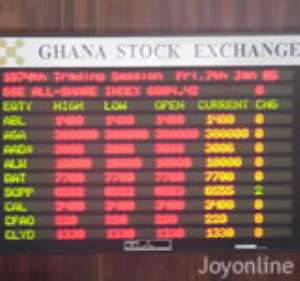 In their bid to unearth factors pushing down the local stock market and to suggest remedies, market participants have given wide ranging suggestions to halt the slump. These include the option for the GSE to take a second look at its major indicator of market performance, the GSE All-Share Index.

In response to a Financial Intelligence survey, a number of seasoned investment analysts failed to understand why the minutest change in stock prices caused dramatic swings in the GSE All-Share Index.

They indicate that the GSE All-Share Index, currently a 'Capitalization-Weighted Index', or 'market-value weighted index”, does not give a true value of performance on the exchange, and suggest adopting an index that adopts a free-float method.

The free-float method, to them, is a better way of calculating market capitalization because it provides a more accurate reflection of market movements. The Free-float methodology, adopted by most of the world's major indices, including the Dow Jones Industrial Average and the S&P 500, takes cognizance of only the number of shares readily available in the market for trade, excluding locked-in shares such as those held by insiders. On Ghana's exchange, there exist a large chunk of untradable shares held closely by insiders, all of which are taken into account in composing the GSE-All Share Index after each trading section. With the new indexation, the call for companies that have a large portion of their shares in the hands of insiders including officers, directors and their families will not count as much as they did hitherto. UT Financial Services and Golden Web were cited as examples of stocks with smaller float. It is explained that the lesser the float in a particular stock, the less the likelihood will be liquidity, and that, depending on the situation, can be either a blessing or a curse”.

A senior officials at the Securities and Exchange Commission (SEC) told the FI that big floats are necessary if our exchange will see improved liquidity and faster price recoveries. The regulator of the capital markets require a minimum of 30% float for newly issued shares. On the other hand, he noted, “for smaller floats, once investors got excited by the stock, they ended up fighting over a small number of available shares, and thus bid up the stock”.

The GSE is full of stocks with small floats, in part because insiders are also large holders of founders stock.

For a stock to do really well, it typically needs to attract institutional buyers, such as mutual funds and pension funds, and these generally want a big float to get interested in a stock. Stocks with large floats may have less dramatic price swings.