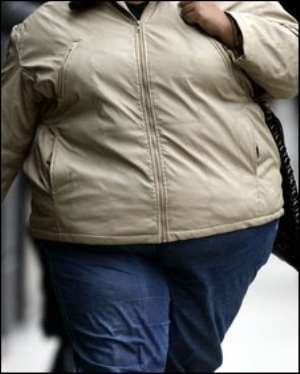 
There is a strong link in obesity between mothers and daughters and fathers and sons, but not across the gender divide, research suggests.

A study of 226 families by Plymouth's Peninsula Medical School found obese mothers were 10 times more likely to have obese daughters.

For fathers and sons, there was a six-fold rise. But in both cases children of the opposite sex were not affected.

The findings mean policy on obesity should be re-thought, the team said.

Researchers said it was "highly unlikely" that genetics was playing a role in the findings as it would be unusual for them to influence children along gender lines.

Instead, they said it was probably because of some form of "behavioural sympathy" where daughters copied the lifestyles of their mothers and sons their fathers.

It is because of this conclusion that experts believe government policy on tackling obesity should be re-thought.

Much of the focus so far in the UK - in terms of targets and monitoring - has been targeted at younger age groups in the belief that obese children become obese adults.

But the researchers said the assumption ignored the fact that eight in 10 obese adults were not severely overweight when they were children.

In fact, they said their findings suggested the opposite was true - that obese adults led to obese children, the International Journal of Obesity reported.

Study leader Professor Terry Wilkin said: "It is the reverse of what we have thought and this has fundamental implications for policy.

"We should be targeting the parents and that is not something we have really done to date."

New direction
His team took weight and height measurements for children and parents over a three-year period.

They found that 41% of the eight-year-old daughters of obese mothers were obese, compared to 4% of girls with normal-weight mothers. There was no difference in the proportion for boys.

For boys, 18% of the group with obese fathers were also obese, compared to just 3% for those with normal-weight fathers. Again, there was no difference in the proportion for girls.

Tam Fry, of the National Obesity Forum, said: "This is telling the government that they now have to look for a new direction.

"We have to make sure parents are in a good condition to bring up their children in a normal manner."

He said he wanted to see more interventions like the one introduced this year offering vouchers to pregnant women for healthy food.

The Department of Health insisted it was already targeting parents through the Change4Life campaign, which was launched at the start of the year and brings together a host of local healthy lifestyle initiatives.

A spokesman added: "The obesity epidemic is one of the most challenging public health issues we face."