“Yes You Can” Obama urges Africa 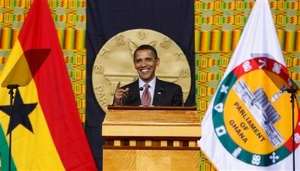 … Health care reform is highest priority
An American president who has “the blood of Africa within me” praised and scolded the continent of his ancestors Saturday, urged Africans to believe in themselves and work towards eliminating poverty and ill health.

“Yes you can,” Barack Obama declared, dusting off his campaign slogan and adapting it for his foreign audience. Speaking to the Ghanaian Parliament, he called upon African societies to seize opportunities for peace, democracy and prosperity.

“This is a new moment of great promise,” he said. “To realize that promise, we must first recognize a fundamental truth that you have given life to in Ghana: Development depends upon good governance. That is the ingredient which has been missing in far too many places, for far too long. That is the change that can unlock Africa's potential.”

The son of a white woman from Kansas and a black goat herder-turned-academic from Kenya, Obama delivered an unsentimental account of squandered opportunities in postcolonial Africa.

America's first black president spoke with a bluntness that perhaps could only come from a member of Africa's extended family.

“No country is going to create wealth if its leaders exploit the economy to enrich themselves, or if police can be bought off by drug traffickers,” he said

“No business wants to invest in a place where the government skims 20 percent off the top, or the head of the Port Authority is corrupt. No person wants to live in a society where the rule of law gives way to the rule of brutality and bribery.

“That is not democracy, that is tyranny, even if occasionally you sprinkle an election in there,” he said, “and now is the time for that style of governance to end.”