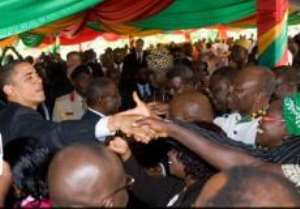 It was a matter of fact that we expected President Attah Mills to be allover President Obama, along with his cabinet and members of parliament and goofing allover

Maybe its the mediocre way we plan our events. Still this was a one time opportunity to interact with the chosen one, the people's president so when it comes to Obama, Omama, Omaba, Bama, there is one thing for sure, you would be obamized standing before him.

Reading the microblogs, it seems our Ghanaian VIP's outdid themselves trying to get a piece of the great one. Heard chairman Rawlings became a paparazzo, taking his own pictures. Sayoo, there goes JJ clicking. And members of parliament became class one kids for a moment jostling for toffee as in a handshake from Obama and maybe getting lucky to be in the same picture with him. Hmm, come to think of it, papa Jerry must be feeling a kind of kinship with Obama as they have the same "conatminated" yevu blood type running in their veins. Maybe toot his horns later about it. Just saying, just saying. Well luckily, the gentle giant Owura Kuffour was "cool" Not to be outdone, Mamacita Zita whipped out her own paparazzo apparatus and clicked away. Blame Mama Zita not, she is the official government paparazzo no?

In reality, all US presidents get almost the same treatment in the US congress as members try to shake hands with the president of the day..Yet, this is Obama son of Africa coming home with his wife who may well be from Ghana via ancestors and their lovely children Sasha and Malia. Obama, Omama, Bama, Bamama whatever, allow Egya mills to goof to be Obamized, you just cannot help it.

To toot a Voodoo Child horn about the encounter with the great one. Voodoo Child shook Obama's hand and the chosen one looked into the former the eye and listened to him talk (mumbled something) He accepted a petition from Voodoo Child and handed it over to an aide. Obama was gracious enough to pose with for a picture but alas, camera fon was Obamized but I bet that image would be on someone's camera and reel. The feeling after the encounter, priceless.

So aye, allow the people to goof allover Obama. For, more than 192 countries in the world, more than 5 billion people rejoicing at the election of this man, how many people will ever get the chance to even look at this living history in person?...Go ahead, get Obamized - definition; the temporal loss of the ability to think, speak coherently in the presence of Obama. Hence Obama, Omama, Bama, Mama, its all good