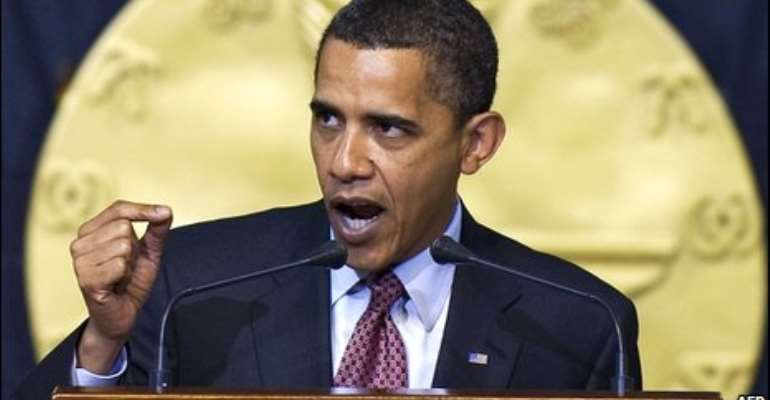 Barack Obama has delivered his first speech in sub-Saharan Africa as US President, stressing Africa's importance for the world, the vital role of governance and the challenges of conflict and corruption. Here are key excerpt from the address to parliament in the Ghanaian capital Accra on 11 July 2009.

ON AFRICA'S IMPORTANCE
I do not see the countries and peoples of Africa as a world apart; I see Africa as a fundamental part of our interconnected world - as partners with America on behalf of the future that we want for all our children.

ON COLONIALISM AND RESPONSIBILITY
It is easy to point fingers, and to pin the blame for these problems on others. Yes, a colonial map that made little sense bred conflict, and the West has often approached Africa as a patron, rather than a partner. But the West is not responsible for the destruction of the Zimbabwean economy over the last decade, or wars in which children are enlisted as combatants.

In my father's life, it was partly tribalism and patronage in an independent Kenya that for a long stretch derailed his career, and we know that this kind of corruption is a daily fact of life for far too many.

ON GOVERNANCE
Development depends upon good governance. That is the ingredient which has been missing in far too many places, for far too long. That is the change that can unlock Africa's potential. And that is a responsibility that can only be met by Africans.

ON CORRUPTION
Repression takes many forms, and too many nations are plagued by problems that condemn their people to poverty. No country is going to create wealth if its leaders exploit the economy to enrich themselves, or police can be bought off by drug traffickers... No person wants to live in a society where the rule of law gives way to the rule of brutality and bribery. That is not democracy, that is tyranny, and now is the time for it to end. ... Africa doesn't need strongmen, it needs strong institutions.

ON AID
As Africans reach for this promise, America will be more responsible in extending our hand. By cutting costs that go to Western consultants and administration, we will put more resources in the hands of those who need it, while training people to do more for themselves. That is why our $3.5bn food security initiative is focused on new methods and technologies for farmers - not simply sending American producers or goods to Africa. Aid is not an end in itself. The purpose of foreign assistance must be creating the conditions where it is no longer needed.

ON HEALTH
Yet because of incentives - often provided by donor nations - many African doctors and nurses understandably go overseas, or work for programs that focus on a single disease. This creates gaps in primary care and basic prevention. Meanwhile, individual Africans also have to make responsible choices that prevent the spread of disease, while promoting public health in their communities and countries.

ON CONFLICT
Now let me be clear: Africa is not the crude caricature of a continent at war. But for far too many Africans, conflict is a part of life, as constant as the sun. There are wars over land and wars over resources. And it is still far too easy for those without conscience to manipulate whole communities into fighting among faiths and tribes.

These conflicts are a millstone around Africa's neck. We all have many identities - of tribe and ethnicity; of religion and nationality. But defining oneself in opposition to someone who belongs to a different tribe, or who worships a different prophet, has no place in the 21st Century. Africa's diversity should be a source of strength, not a cause for division.