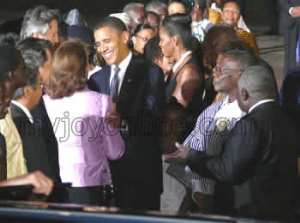 Obama arrived in Ghana Friday night to a brief welcome ceremony, at the Kotoka International Airport and was dotted with exchange of pleasantries and traditional drumming and dancing.

Ministers of state, and dignitaries cut across the socio-political landscape were on-hand for a warm hand shake and the exchange of smiles with Obama.

But Mr. Baaku insists the arrangements were shabby.

On Joy FM's news analysis programme News File on Saturday the avowed critic of the ruling government opined the number of dignitaries line up to welcome the guests were an “over kill.”

The queue he said was highly disorganised.
He was disgusted with ministers of state who he alleged were captured on camera taking photographs of Obama on their mobile phones.

That he said should not have happened.
He advised members of government to behave in a more dignified way in the event of a high profile visit.