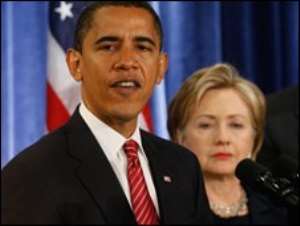 President Obama flies to Ghana Friday in his first presidential visit to sub-Saharan Africa, where he is expected to praise the country's electoral successes and economic development, holding it up as a model for other countries on the continent.

But Africa watchers say Mr. Obama also is likely to use the visit to announce plans to strengthen security and commercial ties with the small but growing African nation.

"The official word is that we're celebrating democracy, but there are probably some ulterior motives," said Gerald LeMelle, executive director of Africa Action, a human rights organization in Washington.

"It has not gone unnoticed that oil was discovered, and Ghana has 600 million barrels under it and offshore. And many Ghanaian leaders think the U.S. might like Ghana to serve as a kind of capital for Africom," the U.S. military command responsible for African operations, he said.

Ambassador Amina Salum Ali of the African Union mission in Washington said the visit is important for the volatile region.

"The visit is very significant for the whole of West Africa, since it is a scene of instability," Ms. Ali said. "Ghana has allowed democracy to mature, and they have a social network that allows a lot of peaceful dialogue to take place."

Ghana sits on the eastern Atlantic Ocean, on the southern side of Africa's western hump. The tropical nation of low plains and plateaus is home to 23 million people, mostly Christian and of various ethnic groups. About 55 percent of Ghanaians work in agriculture, and many work in gold and cocoa production, according to the CIA World Factbook. The government is steadily privatizing state-owned industries, and production of petroleum products, discovered in 2007, will skyrocket within a decade. But right now, 30 percent of Ghanaians live on less than $1.25 a day, below the United Nations poverty line.

The election outcome was decided by less than 1 percent of the vote in a runoff. The ensuing transfer of power was peaceful, displaying the increasing success of democracy in a country and continent known for racial and partisan strife accompanying elections. Experts said the transition is the primary reason for Mr. Obama's visit.

"Peaceful transition of power is worth noting on a continent known for presidents seeking life terms," said Brett Schaefer, an Africa specialist at the Heritage Foundation, a conservative think tank in Washington. "It's not noted enough how significant this democratic transition is."

groups," which provide citizens a platform in elections by focusing on human or civil rights or issues such as debt forgiveness, in place of racial or tribal interests.

"Ghana has a great many educated people, and they recognize their strength to speak, especially internationally, is in numbers," he said.

The direct and peaceful involvement of so many citizens in Ghana's democratic process has reduced corruption and increased stability, even while the rest of West Africa struggles with drug trafficking, corruption and civil war.

That progress earned Ghana a Millennium Challenge Corp. grant of $547 million from the United States in 2006 to support the country's agricultural sector - a sector ironically hindered by agricultural subsidies that the U.S. and other industrialized countries pay out to domestic producers, said Mr. LeMelle.

"Compared to the region, they're doing extremely well democratically and fairly well in terms of economic development," Mr. Schaefer said. "I think its strengthening tradition of accountable and democratic government will help [Ghana] as it begins to export more."

Mr. Obama's choice of Ghana for his first official trip to Sub-Saharan Africa has triggered a bout of self-questioning in Nigeria and Kenya, where many see his itinerary as a deliberate snub, Reuters news agency reported.

Kenya is the home of Mr. Obama's father, and the president's grandmother and a half-brother still lives there. Nigeria is Africa's most populous country and has considerable oil reserves.

The first black U.S. president's choice of Ghana as his first stop on the continent has dented the pride of the two states, which consider themselves equally important and worthy of a visit.

"It's like him visiting [the Welsh capital] Cardiff, but not London," one disgruntled Nigerian resident told Reuters.

Mr. Obama visited Egypt in June for a landmark address to the Muslim world. While Egypt is in North Africa, traditionally it is considered part of the Middle East.

"Using it as a hub would allow the U.S. to keep an eye on Nigeria and the whole Gulf of Guinea," Mr. LeMelle said, noting the United States already keeps a very large embassy in the Ghanaian capital, Accra.

"I think he'll make all the right statements: congratulating them on the recent election, encouraging the economic improvement," Mr. Schaefer. "But the United States has been trying to convey these lessons to developing countries around the world for decades."

Ms. Ali said Ghanaians were not the only ones optimistic about the results of Mr. Obama's visit and speech.

"We are stretching our ears and cleaning our eyes before this speech in all of Africa," Ms. Ali said. "We hope it will enlighten and inspire people to improve economic development, poverty alleviation and peace in West Africa and the continent."

Authorities in Ghana have been preparing for Mr. Obama's weekend visit by deploying more than 10,000 police.

Assistant police commissioner Daniel Avorga told the Associated Press that the security forces would be deployed in both Accra and the town of Cape Coast, where Mr. Obama and his family will visit a former British fort once used to ship slaves to the Americas.