Obama: Achieving after the fall 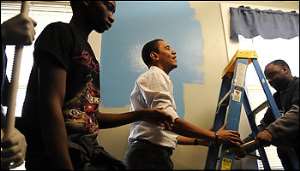 "Though a righteous man falls seven times, he rises again." Well quoted from the Bible, it can be concluded that the fallen state of the human race has never been in doubt. The feat of human achievement as dotted in history has never been as a result of the absence of failure nonetheless more towards an overt awareness of it and its management. The radiant glory of human ends typically blinds our regard for the season of failure management as the dark room where the most beautiful colours get processed.

Psychologists never fail to flag the cumulative relationship childhood and youthful experiences and their impact on adult life. Early growing-up years automatically form a foundation which remains an asset to build-on or a liability to be managed. The inexperienced mind which embarks on this lone journey of identity and purpose discovery is an apology, no wonder quite a number of people shudder to even think about their childhood experiences.

OBAMA; and I mean the brand Obama has inspired and continues to inspire many with his charismatic personality. Within his psyche is the word HOPE...rendered “Yes, we can!” He takes HOPE to an audacious altitude unmatched in recent history. O Yes! Obama is a Yes-I-can! His growing-up years typifies a No-I-give-in! Obama has actually written and talked about using alcohol, marijuana and cocaine during his teenage years to "push questions of who I was out of my mind". At the civil forum on the presidency in 2008, Obama identified his high-school drug use as his "greatest moral failure".

In his book, Peak Performers, Dr. Charles Garfield describes how the astronauts keep their spacecraft on course. "On their flights between earth and the moon, it was said, the Apollo ships were off course much of the time. In each instance, the spacecraft would wander off its path and the crew would correct—wander off and correct, again and again. And do you know what? It didn't matter. What mattered were the results. They got to the moon. They got home. They did it by having the discipline and knowledge to get themselves back on course. They followed not a perfect path, but a critical path."

Richard (Dick) Innes writes “whether we're shooting for the moon, seeking to achieve a better personal or family life, or seeking to obey and serve God, whatever our goals, the principle is the same. There are always unpredictable and unexpected events that call for change and adjustment. Although the astronauts had to be precise in their calculations, they still allowed for mistakes and corrections. The person who doesn't allow for such adjustments will probably not reach his or her goals.” As Garfield said, the critical path is the way to reach any target. For the Christian, our goal is to obey and serve God and to go on to maturity. We will stumble at times, make mistakes, fail, and hit many a bump in the road.

When we fall, however, the important thing is to get up, correct our course and go on. This is the critical path for us. The bumps are what we climb on!