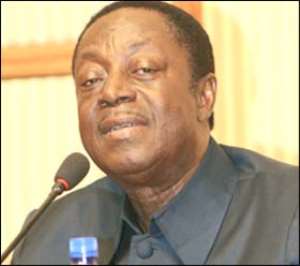 The Venture Capital Trust Fund, was established by Act of Parliament (Act 680) in 2004 to provide funding to support the development of small, medium and micro-enterprises while the Central Tender Review Board, formed under Act 633, is mandated among others to ensure the judicious use of state resources at ministries, departments and agencies.

SIC Life, established in 2007, is expected to contribute to economic growth and efficient resource allocation through the transfer of risk and mobilization of savings in the long term.

Administering the Oath of Allegiance and Oath of Secrecy to the board members of SIC Life, Dr. Duffour said the company was important and growing part of the country's financial sector.

He said a resilient and well regulated insurance industry could contribute significantly to economic growth and efficient resource allocation through the transfer of risk and mobilization of savings.

Dr. Duffour tasked the board to aggressively mobilize funds from households sector and channel them to corporate and public sectors.

The Minister said maturity of the banks was generally shorter than that of insurance companies.

Dr. Duffour said “This should enable you to play a large role in the long tern bond market. At the same time, your portfolio is typically more liquid than those of banks, which makes you less prone to liquidity”.

According to him, a strong insurance industry could also relieve pressure on government budget, to the extent that private insurance could help reduce the demand on government social security programmes.

He advised board members of the Central Tender Review to explore creative ways of using the public procurement system to support the growth and empowerment of local small, medium and micro enterprises other than the known national competitive tendering, where only domestic contractors and suppliers were eligible.

Dr. Duffour cited corruption as a problem associated with public procurement system saying that the common practice had been payment of “kickbacks,” extraction of rent from bidders and service providers by public officers.

He said this practice should not be entertained and urged the members to ensure that goods, services and facilities were delivered with defined standards within a given budget.

Dr. Duffour said “The pursuit of economy and effectiveness should permeate not only in the actions of public institutions but also the actions of suppliers and contractors who were paid from government budget”.

He urged board members of VCTF to ensure that small, medium and micro enterprises supported through equity funding were successful.