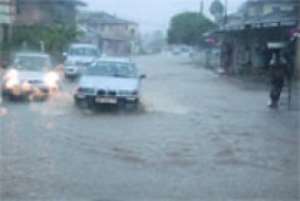 Floods at Adabraka Official Town after midday downpour in Accra Heavy rains yesterday caused massive floods in parts of Accra and displaced hundreds of people in the Sekondi/Takoradi metropolis where property running into thousands of Ghana Cedis were also destroyed.

In Accra, a Rapid Response Team comprising personnel of the National Disaster Management Organisation (NADMO) and the 48 Engineers Regiment of the Ghana Armed Forces (GAF) moved to the western part of the city to rescue victims from the floods.

The Public Relations Officer (PRO) of NADMO, Major Nicholas Mensah (retd), commenting on the situation in the flood-prone areas during the downpour, attributed the situation to the activities of residents who had defied warnings from NADMO to relocate.

“Those residents who have on a number of occasions been advised to leave for their own safety continue to stay only to call on NADMO for support when their houses get flooded,” he said.

He said all attempts to convince the residents in low-lying areas to find alternative abode to save themselves from drowning and protect their valuables had so far fallen on deaf ears and reiterated that they better listen to advise because the rains had not as yet ended.

“Until we have been able to work on the drains, we will continue to experience flooding so it is better if those living in flood-prone areas relocate before they are faced with serious problems,” he added.

He said NADMO had erected tents at Mataheko and Sakaman and expressed the hope that those closer to the tents would make use of them to protect themselves from floods.

To help prevent any outbreak of diseases in the flooded areas, Major Mensah said the Disease and Epidemic Committee of NADMO, which is made up health professionals, had visited the affected areas to access the situation and offer advice accordingly.

He also said that quite a number of relief items had been distributed to the victims and said the items included mattresses, blankets, second hand clothing and food items.

Areas such as Kaneshie, Mataheko, Atico, Sakaman, Bubuashie, Sukura, Dansoman-Agege, Abossey Okai and surrounding areas which got flooded last week and claimed at least seven lives once again experienced the floods which made residents call on NADMO for assistance.

The organisation, in some instances had to use water pumping machines to pump out water from homes of people after the rains especially in and around Sakaman.

In the Sekondi/Takoradi area, residents of Nkotompo, Kansawurodu, Assakei, Windo, Apremudu and Kokompe, all in the metropolis kept wake due to the non-stop rains which started at about 10 p.m. on Sunday.

The rains also halted economic and school activities for hours as some basic and second cycle institutions remained closed after the rain subsided late Monday afternoon.

At the time of going to the press at about 3:30 p.m. it continued to drizzle and the weather remained much clouded.

The flood, according to the engineers, was due to the location of buildings on the water ways and if the rains did not stop it could cause more havoc.

At a low land area at Nkontopo near the Effia-Nkwanta Regional Hospital, residents said they were tired of scooping flood waters water out of their houses because the running water from the higher parts of the metropolis continued to settle in the community.

At the Kansawurodu and I-Adu Metal roads, shops and other residential facilities were not spared. Victims said they did not anticipate such volume of water to flood their shops and homes since the weather was normal last Sunday.

As at the time the Daily Graphic news team got to some of the affected areas, some people were still trapped in their houses.

According to the officials of the Sekondi/Takoradi Metropolitan Assembly engineering department, the root of the problem was the indiscriminate siting of buildings at unapproved places.

The assembly expressed shock at the location of some of the building and wondered how the owners got the approval or managed to complete their houses in such a short time.

At Assekai, those affected were seen wading through the mud to salvage the remaining items from their rooms.

The residents are calling food and other forms of support to help them survive until they got back on their feet.