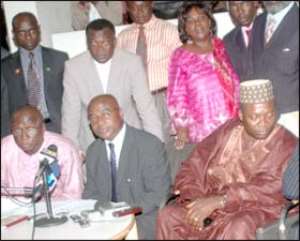 MPs at the press conference MINORITY MEMBERS in Parliament yesterday descended heavily on their colleague, P.C. Appiah-Ofori, for accusing them of receiving $5,000 each as bribe to approve last year's sales and purchase agreement between government and Vodafone.

In registering their displeasure about the allegation, which was re-echoed on the floor of Parliament by Hon. Felix Tsumasi-Appiah, NDC MP for Sene, Minority MPs staged a dramatic walkout from the legislature.

Hon. Kyei-Mensah-Bonsu contended that the statement by Tsumasi-Appiah, which had not been proven by the accuser, P. C. Appiah-Ofori, was an affront to the dignity and integrity of Minority members and the House as a whole.

The Minority subsequently staged the walkout because the Sene MP failed to withdraw the statement and apologize accordingly.

Yesterday, P.C. Appiah-Ofori himself was missing in action, as he was absent from Parliament after speaking earlier to several radio stations.

Speaker of Parliament, Justice Joyce Adeline Bamford-Addo, who witnessed her first walkout, had no option but to refer the matter to the Privileges Committee of the House for investigation after heated debate and serious heckling by members from both sides.

Addressing a news conference immediately after the walkout, Minority Leader, Osei Kyei-Mensah-Bonsu, stated that the Minority MPs would not take part in any voting or decision-making on the floor of the House until the allegations of bribery were thoroughly investigated.

The House had to defer the approval of a $300million loan from the International Development Association (IDA) of the World Bank as it could not raise the needed numbers for a vote, following the Minority walkout.

Hon. Kyei-Mensah-Bonsu noted that as much as the Minority believed in moving government's business forward, they could not take part in any voting until the bribery allegations were investigated because they might be accused again of taking money before voting for the loan agreement.

According to him, the allegation had a wider implication for the integrity of members and parliament as an institution, adding that the matter must be expeditiously investigated to preserve the respect and dignity of the House.

“Ordinarily, we would have dealt with the matter at a different forum because the allegation was coming from someone who had disgraced his wife for infecting him with gonorrhea but for it to be repeated by Hon. Tsumasi-Appiah on the floor of Parliament, it must be thoroughly investigated,” Hon. Kyei-Mensah-Bonsu fumed.

He contented that the NDC MP's allegations clearly offended standing order 93 (2) of the House, which stipulates that “it shall be out of order to use offensive, abusive, insulting, blasphemous, or unbecoming words, or to impute improper motives to any other Member or to make personal allusions”.

Earlier in an interview with DAILY GUIDE, Hon Kyei-Mensah-Bonsu described the allegation as wicked and baseless, believing such spurious claims could only come from someone suffering from “cognitive dissonance”.

P.C. Appiah-Ofori cited as his source of information, the First Deputy Speaker, Hon. Doe Adjaho, who himself claimed on radio that it was a rumour he heard which he passed on.

Kwadwo Okyere Mpiani, former Chief of Staff, also in radio interviews yesterday, said P.C. Appiah-Ofori wrote a letter to former President Kufuor about the allegations and when he was told there was no iota of truth in the claims, he wrote another letter to withdraw the earlier letter.

According to him, Appiah-Ofori apologized and said he was wrongly advised, adding that it was baffling for the same man to raise the issue again.

The controversy began when MP for Bimbilla, Dominic Nitiwul, in a heated debate over the loan agreement, questioned government's commitment to apply the funds for the purposes for which it was being contracted, expressing misgivings that the monies from the loan may be misapplied as the Transition Team did by using a colossal amount of ¢1.35 billion for tea and refreshment as disclosed by the Finance Minister, Dr. Kwabena Duffuor recently.

This did not however go down well with the Majority side, resulting in Felix Tsumasi-Appiah, NDC MP for Sene, also accusing the Minority of misapplying public funds when they were in government.

He further alleged that the Minority MPs had collected $5,000 each before voting for the Vodafone deal.

The Minority demanded a retraction and an apology, which Twumasi-Appiah was not ready to render.

Meanwhile, two members of Parliament, including the MP for Kade, Hon. Ofosu-Asamoah, have filed a writ at an Accra Fast Track court asking for a retraction of the publication in the media. They are also demanding perpetual injunction and damages of one million Ghana cedis from P.C. Appiah Ofori.

Counsel for the Minority, Captain Nkrabea Effah-Dartey (rtd), told Joy News yesterday that he has been instructed by his clients to issue a writ of summons against P.C. Appiah-Ofori.

He said, hopefully, by 9 am today, the suit would be filed in court.

The Editor-in-Chief of Enquirer newspaper, Raymond Archer, and Focal Media Limited, publishers of the Enquirer, were joined in the suit.