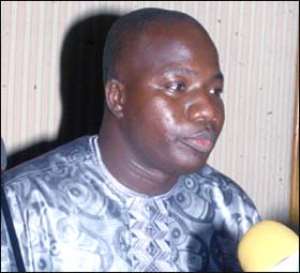 THE PRESIDENT'S Spokesperson, Mahama Ayariga's head is beneath a guillotine, as fierce calls for him to be booted out of office intensify.

This followed repulsive revelations that not only was he allegedly implicated in a dishonest purchase of subsidized tractors exclusively meant for underprivileged farmers, but he purportedly ordered for himself as much as five of the tractors and paid the price of only one.

Addressing a news conference in Accra on Monday, another political pressure group, the Progressive National Forum (PNF), called on Mr. Ayariga to as a matter of urgency, resign his position so as to avoid interference with investigations into the allegations.

Former President Rawlings publicly joined the Ayariga bashing over the weekend, when he expressed disappointment over the issue and warned that the ruling National Democratic Congress (NDC) may lose the next election if its officials continued with such dishonest conduct.

Richard Nyamah, Spokesperson for PNF, provided a letter purported to have been written by the Director of the Ministry of Food and Agriculture and addressed to Mr. Ayariga, explaining that the latter had been allocated one Kubota tractor with matching implements and that the facility cost GH¢18,000 but he would be required to make an initial down payment of GH¢10, 000 before taking delivery.

“Interestingly, Ayariga is telling the whole world that he bought five tractors and not one and that he paid an amount of GH¢10, 000 for the five. He knows very well that the five tractors would cost GH¢90, 000 and that the down payment would be GH¢50, 000; so how come he paid just GH¢10, 000?

“There are records that many other farmers who could not meet the down payment (requirement) had their tractors snatched from them and reallocated to others who had the cash; so what is Ayariga saying? Where is the short fall of GH¢40, 000? And in any case, the receipt we have shows that Ayariga paid only GH¢1, 000 and not the GH¢10, 000 he is claiming.

“The rules of the game are stated in black and white and our President's Spokesperson has greedily misbehaved himself in broad daylight,” Richard Nyamah noted.

The PNF said it had credible information that most of the tractors had been distributed to members of the current Executive and some parliamentarians. It provided documents from the Ministry of Food and Agriculture to show that the Majority Leader in Parliament, Alban Bagbin, and Alhaji Ibrahim Dey Abubakari, the Member of Parliament for Salaga, also purchased some of the tractors subsidized for underprivileged farmers.

The group also called on the Ministry of Food and Agriculture to make public, the names of all persons who had purchased the said tractors.

Allowance For Workers Who Lost Job Due To Covid-19 — Mahama ...
5 minutes ago

Ghana Back To HIPC Not Surprising, Spending 46% Of Tax Reven...
23 minutes ago