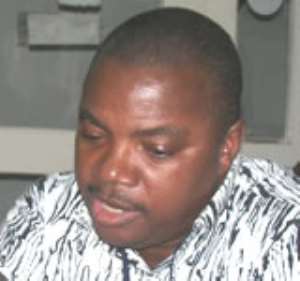 Day in day out when one accesses both the print and electronic media, one is inevitably fed with stories centred on politics; 'Ministers of state embezzles money;' 'Speaker of Parliament loots state property;' 'BNI detains Minister;' etc. These are the sort of stories that make the news twenty- four hours a day, seven days a week. All talk shows, editorials, columns and comments are based mainly on these issues.

Meanwhile, an old man in Wa purchases a newspaper daily with the principal objective of finding out why his pension hasn't been paid for months; a cocoa farmer at Mampong watches television regularly basically to find out when the government will construct the road that links his village to the city so that the cost of transporting his cocoa from the village to the city will reduce; an old woman at Ateibu listens to her wireless radio daily hoping to find out when the government will provide her village with electricity and pipe borne-water; so also, a child in the northern region listens to radio hoping to find out when the government will build new class room blocks for her school so that she stops learning under trees and canopies. All these individuals are not only denied (by the media) of the news or information they crave, but they are also burdened with political news and arguments that are irrelevant to them.
Some of the basic roles of the media in any society include:
Opening up channels of communication to enable public access to the government and its structures and to engender public involvement and discussion of government activities.
Ensuring good governance and government accountability through the provision of news and accessible information.
Educating through the provision of news, entertainment, and information.
Bringing societies, social institutions and culture closer to each other through news coverage and provision of information.
Performing watch dog roles over the government and their agencies and institutions as well as over society and its institutions.

One of the most important (if not the most important) of the roles of the media is opening up channels of communication to enable public access to government. This role obliges the media to open up avenues through which those who make up the society can channel their needs and grievances to government; however the Ghanaian media doesn't seem to be performing this role. Everyday people cry for water, electricity, good roads, schools, hospitals and many more yet the media does nothing to put these issues in the spot light.

Experience has proven that prior to elections, politicians condescend to the level of the people, talk humbly to them, make all sorts of promises and plead with the people to vote them; 'you will be the masters and we will be your servants' is a familiar refrain from politicians. However, having been elected by the people into office, politicians throw away their 'servant' status and assume the status of 'masters'. They ascend unto a very high platforms and it becomes very difficult for those who elected them into office (and are supposed to be masters) to get access to them and get them to at least fulfil some of the promises they made prior to being elected.
This is where the media comes in. It is the duty of the media to do investigative journalism, find out the peoples' problems and needs and channel those findings to government. In fact, the media is supposed to put pressure on government to address those problems putting those issues in the spot light until the government addresses them.

There are villages in Ghana that still lack basic social amenities like electricity, pipe-borne water, tarred roads, schools, hospitals and many more, even after fifty years of independence. Who is talking about the Northern Region, a perfect epitome of poverty and infrastructural backwardness? These are some of the issues that should be discussed on television and radio shows. Our newspapers, more so the state owned ones, should carry headlines that provide avenues for development. We should see headlines like `construct Anyaa-Ablekuma road, `Develop Northern Region` instead of the usual political headlines like `Minister embezzles money. ` Even if a minister embezzled government money, does that really affect the man on the streets who cannot afford three square meals a day?

So also, the electronic media, more so radio stations should discuss pertinent issues that will impact positively on the lives of Ghanaians instead of the usual debates that see representatives of the two main political parties arguing whether the `arrest of someone by the B.N.I` or the `looting of state property by a former speaker` is justified or not. These are debates that often degenerate into irrational attacks on individuals, groups and even ethnic groups. We should rather have programmes that allow intellectuals and well- meaning Ghanaians to discuss how to end unemployment, road accidents, poverty in rural areas, how to prevent floods from destroying precious lives and property and many more. These are issues that the Ghanaian media should prioritize.

I admit that journalists, especially those in the print media want to make quick sales; therefore they go for the explosive political stories that attract readers. There is absolutely nothing wrong with providing the Ghanaian with information regarding good governance, government accountability, or corruption in the public service; however, that information should not be prioritized at the expense of other pertinent issues that can lead to the acceleration of Ghana's development. Because if a Minister of state embezzled money and he becomes the subject of news stories, editorials, and discussions on the electronic media for weeks, will that provide electricity and water for my friends in the rural areas, will that provide employment for the youth, will that bring joy and satisfaction to my fellow Ghanaians in Bawku? Obviously no! The Ghanaian media should therefore ask questions of pertinence; `what can be done to prevent flood from destroying lives and property, what can be done to provide basic social amenities for those in the deprived regions, what measures can be taken to improve the working conditions of teachers, police officers, prison warders etc. why doesn`t the Ghana Institute of Journalism have hostel facilities even after fifty years of independence. These are the issues that should be the subject of media discussions.
Conclusion:

There is no doubt issues involving corruption and malfeasance has to be brought to the fore by the media. However, these issues shouldn't take all the attention of the media. They should be some space and time for other issues that will benefit the people. I'm certain that if the Ghanaian media has over the years dealt with issues relating to national development with the same enthusiasm and concern with which it has perpetually dealt with political issues, by now Ghana would have developed 'infrastructurally'. In other words basic amenities like pipe born water, electricity, good health care, good schools, good roads etc would by now be available in every Ghanaian town and village. But because our media has ignored some of these issues, the problem lingers on.

The media's role in the development of Ghana cannot be over emphasized. The media's importance to the nation's development is invaluable; it therefore behoves the journalists who make up the Ghanaian media to open up avenues for national development by prioritizing issues that that can improve the life of the Ghanaian electorate.

Ghanaian journalists should also eschew partisanship and desist from publishing information that can incite the public and create divisions among Ghanaians.

Most importantly, Ghanaian journalists who make up the media should uphold the utmost professional and ethical standards imperative for objective journalism. By so doing, the accelerated development of our dear country will be guaranteed.

Credit: Samuel K. Obour
The Author is studying Communication Studies at the Ghana Institute of Journalism.