Passengers forced to have sex 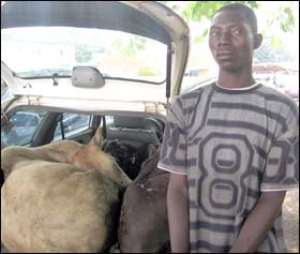 Passengers aboard three vehicles travelling from Mampong in the Ashanti Region to Accra on Friday were subjected to dehumanising ordeal when a group of armed robbers took them hostage and reportedly forced the male commuters to have sex with their female counterparts at gunpoint.

Two of the victims, according to reports, sustained gunshot wounds during the highway robbery attack which occurred at the Asonomaso portion of the Mampong-Kumasi road in the Kwabre District of the Ashanti Region.

Chief Inspector Mohammed Yussif Tanko of the Public Relations Directorate of the Ashanti Regional Police Command, who confirmed the incident, indicated that the security forces have initiated serious investigations into the attack.

Reports say the robbers mounted roadblocks at a down-hill bridge on River Badewam between Adawomase and Asonomaso, where they ambushed the passengers who were believed to be traders.

DAILY GUIDE gathered that the robbers, after holding their victims hostage at gunpoint, allegedly demanded the male passengers to have sex with their female counterparts or risk being gunned down, to which the victims allegedly obliged.

The robbers could, however, not take anything away because the police patrol team in the area managed to foil their operation half-way, Inspector Tanko stated, adding that the passengers had reported the incident to the Mamponteng Police for further action.

In another development, personnel of the Motor Traffic and Transport Unit (MTTU) of the police force in Kumasi have arrested a 28-year-old taxi driver after his Nissan Prima taxi-cab with registration number AS 4986 Z containing two cows was intercepted at Abuakwa.

According to ASP (Mrs.) Aba-Afari, Kumasi Central Divisional Crime Officer, the suspect, Maxwell Kantheriba, who claimed to be a native of Sandama and plied his trade at Ejisu, said he was hired by two unknown men on July 2, 2009 to take the said cows from Abuakwa to Juaben.

She told DAILY GUIDE in an interview that the suspect said he charged the supposed owners of the cows GH¢50.00 as the fare when his friend, one Bongo, agreed to accompany him to Abuakwa in Kumasi.

She continued that the suspect claimed he had earlier in the day been hired by the two men who requested him (driver) to come and pick them for another service, which eventually turned out to be the transporting of the cows.

The police officer disclosed further that the supposed owners bolted when the MTTU personnel, who were on their normal routine checks, stopped them between Tanso and Abuakwa on the Kumasi-Sunyani road.

ASP Aba-Afari therefore called on the general public to feed the police with vital information to enable them to ascertain the veracity or otherwise of the suspect's claim.